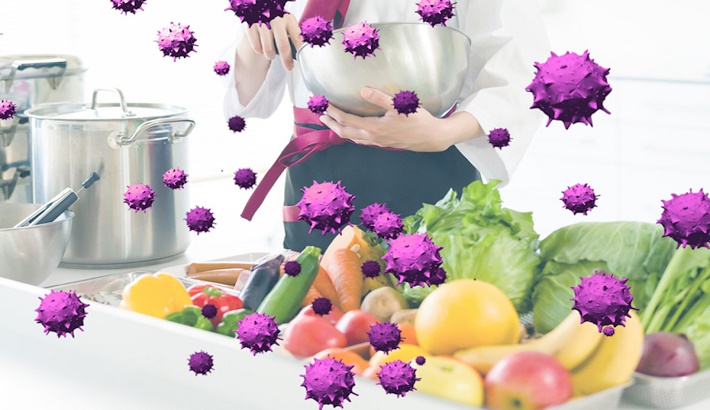 Foodborne illnesses are quite prevalent in today’s time. What is important is to maintain hygiene and being aware during the process of food procuring, handling, and storage.

According to a survey done by the Centre for Disease Control & Prevention, it is estimated that each year 48 million people get sick from a foodborne illness, 128,000 are hospitalized, and 3,000 die.

These diseases are borne from food encompass a wide range of illnesses from diarrhea to cancers. Most of them cause gastrointestinal issues, though they can also produce neurological, gynecological, and immunological symptoms. Diseases that cause diarrhea are a major problem in all countries of the world and mostly affect children under 5 years of age. The causes fall into the following 3 categories:

Biological hazards are the most common cause responsible for foodborne illnesses.

Physical hazards can include metal shavings from cans and plastic pieces or broken glass present in food that lead to its contamination.

The symptoms of foodborne illnesses range from mild to severe and depend upon the microbe that has been ingested. However, common symptoms are as follows:

It might take hours or days to develop symptoms after you consume contaminated food.

Practice hygiene – Practicing hygiene the first step towards the prevention of food-borne diseases. One should wash hands before handling food and often during food preparation and after going to the washroom. Washing and sanitizing all surfaces and equipment used for food preparation is imperative.

Separate raw and cooked food – It is important to separate raw meat, poultry, and seafood from other foods. This can be done by using separate equipment and utensils such as knives and cutting boards for handling raw foods.

Storage– The majority of times, food contamination occurs at the time of food storage. Care should be taken to store containers separately in different containers to avoid contact between raw and prepared foods.

Temperature – Keep food at the correct temperature. Make sure to not leave cooked food at room temperature for more than 2 hours. All cooked and perishable foods should be refrigerated promptly (preferably below 5°C).

Why testing for Covid-19 is still important