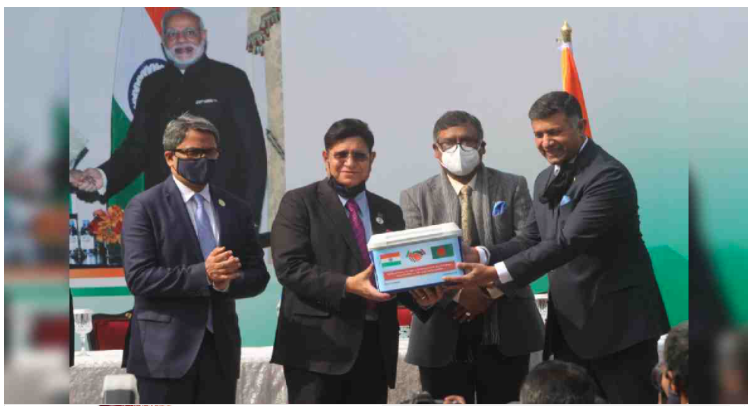 “It’s a historic day. They’ve (Hasina and Modi) achieved such a goodwill and strong relations! It shows the sign of that bonding,” he said after receiving the Oxford University and AstraZeneca vaccine as gift from India.

Indian High Commissioner to Bangladesh Vikram Kumar Doraiswami handed over the Covid-19 vaccine to Foreign Minister and Health Minister Zahid Maleque at a ceremony at State guesthouse Padma on Thursday afternoon. State Minister for Foreign Affairs M Shahriar Alam was, among others, present.

The Foreign Minister said Prime Minister Sheikh Hasina from the day one laid emphasis on partnership and collaboration in dealing with the Covid-19 situation.

He said many developed countries are yet to get the vaccine and Bangladesh is one of the earliest recipients of vaccine in the world.

Reiterating the highest priority India attaches to Bangladesh under India’s Neighbourhood First Policy, Prime Minister Narendra Modi on December 17 assured that vaccines would be made available to Bangladesh as and when produced in India.

Both Prime Minister Hasina and her Indian counterpart Modi also noted the ongoing bilateral collaboration between the private sectors in this area.

Asked whether the Foreign Minister will get vaccinated, he said since he is elected by people, he would prefer to save their lives first.

The Foreign Minister thanked the Health Ministry for managing the situation though there has been negative campaign centering Covid-19 situation and its death toll. “We remain connected and are working together.”

He also thanked the people of India and the Indian government for sending the vaccine as a gift.

Indian Minister of External Affairs Dr S Jaishankar tweeted on “VaccineMaitri”, saying that India reaffirms the highest priority to its relations with Bangladesh.

It is part of commitment made at the highest level -– Bangladesh Prime Minister Sheikh Hasina and Indian Prime Minister Narendra Modi — and as part of ‘Neighbourhood First’ policy, said Indian High Commissioner Doraiswami.

He said Bangladesh and India will fight the disease together as friends.

Another 50 lakh doses of the vaccine from India are expected to arrive within this month.

Some 50 lakh doses of vaccine are scheduled to arrive in each of the next six months as per the agreement.