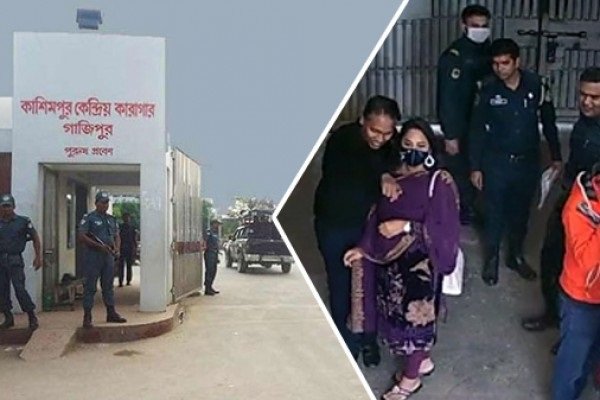 Senior Jail Super Ratna Roy and Jailer Nur Mohammad Mredha have been withdrawn as investigation is underway over providing special treatment to Hallmark Group General Manager Tushar Ahmed by allowing women to meet the prisoner at Kashimpur Jail in Gazipur.

Earlier on January 06, Tushar, brother-in-law of Hallmark MD Tanvir Mahmud, allegedly met a woman in the cabin of a prison official for about 45 minutes.

The woman was allegedly escorted to the cabin of a prison official by Deputy Jailer of Kashimpur Central Jail-1 Md Golam Saqlain, and two others. Senior Jail Super Ratna Roy was present at her office during the time.

At least two committees have been formed to probe the alleged role of some officials at Kashimpur Central Jail-1.

Gazipur Deputy Commissioner MM Tariqul Islam said that an inquiry committee headed by an additional deputy commissioner was opened over the matter on January 12.

It is learned that probe bodies already visited Kashimpur Central Jail-1 and talked to all concerned. They also spoke to the accused prisoner Tushar.

Deputy Jailer of Kashimpur Central Jail-1 Md Golam Saqlain said the meeting was arranged with the permission of Super sir.

“Do I have the power to bring the accused from inside the jail?  There are gate orders, joint forces, habildars and subedars. “I brought the accused alone. Is it possible,” he said.

Referring to the video footage showing him bringing the accused, he said “Yes, I did. I am not denying it. I was told to do it. So, I brought him.”

This correspondent tried to contact Kashimpur Central Jail-1 Senior Jail Super Ratna Roy for comments on the matter, but she could be reached over phone.

According to various sources it came to know that with the involvement of a senior official of the jail concerned, and few other jail guards, Tushar had the opportunity to meet with the woman privately in the jail.

According to multiple sources, name of the woman is Asma Sheikh, wife of Hallmark Group’s GM Tushar, a prisoner at Kashimpur Central Jail. She had reportedly met her husband once before in the jail.

The incident reportedly took place on January 6, but it came to light on Friday after a TV channel aired the CCTV footage.

In the video clip, Tushar Ahmed was seen to walk casually in office area of the prison in afternoon on the day. Few moments later, a woman entered the prison from the outside.

It was also seen in the video clip that the woman had entered the jail at 12:55pm and Deputy Jailor Saqlain himself receiving the woman at the entrance and escorting her to his office.

At one point, the Deputy Jailor left his office and returned there along with Tushar Ahmed after around ten minutes. Later, Saqlain left his office leaving Tushar and the woman was there for about 45 minutes.