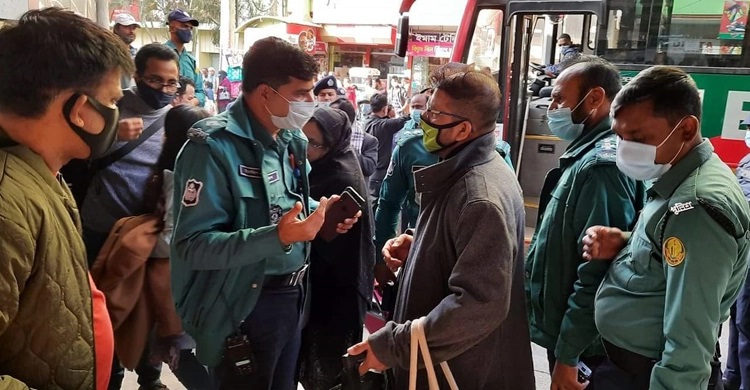 Twenty-eight Bangladeshis, who arrived in Sylhet from the UK four days ago, have tested positive for coronavirus.
They have been hospitalised under government management, Sylhet Metropolitan Police’s Additional Deputy Commissioner BM Ashraf Ullah Taher said Monday night.
All of the UK returnees were in quarantine at various hotels since their arrival on Jan 21.
Ashraf said 157 expatriate Bangladeshis came to Sylhet on a Biman Bangladesh Airlines flight from the UK. They were sent to institutional quarantine under the supervision of the army and police.
Initially, all of them tested negative for the virus.
They were scheduled to stay in quarantine for four days. Their samples were again tested on Sunday, a day before they were to leave quarantine.
“Twenty-eight of the samples returned positive results,” the police officer said.
Of them, 15 were staying at Hotel Nurjahan, five at Britania, four at Holygate, three at La Rose and another at Holy Side.
“We’ve admitted them to a 31-bed hospital at Khadimpara and keeping an eye on them,” the SMP officer said.
More Bangladeshis return from UK
Many countries have suspended air travel with the UK after a new strain of the virus was identified there.
But national flag carrier Biman is continuing two weekly flights to the UK.
On Monday, 143 people came from there. They were sent to quarantine after they landed at the Osmani Airport.
It is still unclear whether Biman would suspend operating flights to the UK after the new cases were identified.
Covid-19 situation in Bangladesh
Bangladesh has so far confirmed 532,401 cases and 8,041 coronavirus deaths. The health authorities reported 18 deaths and 602 new cases.
The daily detection rate was 4.06 percent while the overall rate is 14.91 percent. The mortality rate is now 1.51 percent, the Directorate General of Health Services said.
So far, 476,979 patients (89.59 percent) have recovered.
Bangladesh reported its first Coronavirus cases on March 8 and the first death on March 18.
Meanwhile, more than 99 million people have been infected with Covid-19 across the world, according to Johns Hopkins University (JHU). The total case count was 99,177,542 with 2,129,134 fatalities in the morning.
2021-01-25
Mr. Admin
Previous: Bangladesh sweep ODI series 3-0 against West Indies
Next: Due global climate adaptation actions not possible for lack of finance: PM Sheikh Hasina