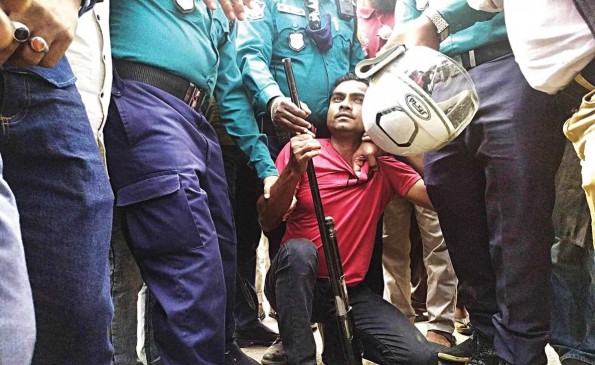 Faisal Ahmed Fahad, Liberation War Affairs Secretary of Sylhet Metropolitan Swechchhasebak League and a resident of Pirmahalla area of the city, was arrested with a weapon during a clash between transport workers and city corporation workers while removing an illegal rental car stand on the side of Chauhatta-Amberkhana road in Sylhet city. Photo: Collected

Three cases have been filed in connection with yesterday’s clash between transport workers and police, Sylhet City Corporation (SCC) staffers following attempt to evict an illegal microbus stand on Chowhatta-Amberkhana road in Sylhet.

Among the cases filed with Kotwali Police Station last night, two were filed by police while another by the SCC, our Sylhet correspondent reports quoting Officer-in-Charge of the police station SM Abu Farhad.

One of the cases was filed under Arms Act by Sub-inspector Mostafizur Rahman against Foysol Ahmed Fahad, the Liberation War affairs secretary of Swechchhasebak League’s Sylhet city unit, who was detained with firearms from the spot yesterday.

Sub-inspector Abdul Mannan filed another case against 17 named and 100-150 unnamed transport workers for attacking and assaulting police during the lawful eviction drive.

In the case filed by the SCC, the city corporation’s Sub-assistant Engineer Debabrata Das accused 10 named and 100-150 unnamed persons for barring SSC officials and workers from discharging their duties.

SM Abu Farhad, officer-in-charge of Kotwali Police Station, said, “Only one person was detained from the spot with firearms. We are conducting drives to arrest the other accused.”

TRANSPORT STRIKE IN SYLHET FROM MONDAY

Meanwhile, in protest against the drive that resulted in clash, transport workers called an indefinite transport strike in Sylher district from 6:00 am on Monday.