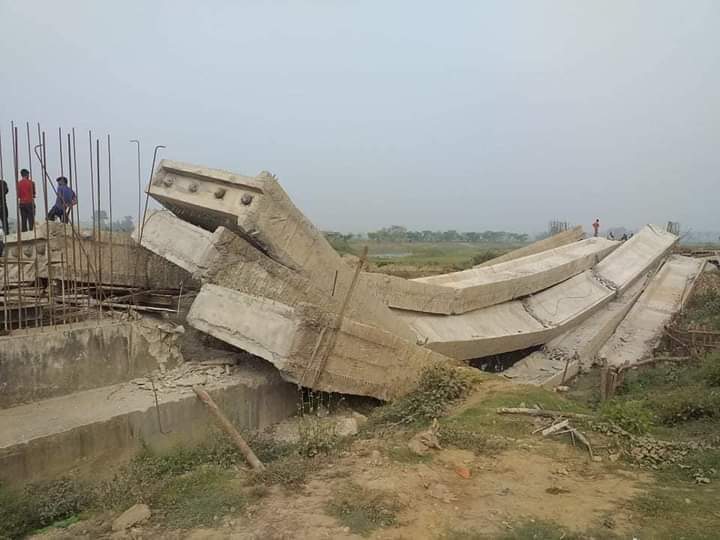 A bridge under construction across the Kondanala canal on the Sunamganj-Jagannathpur road has collapsed even before its inauguration.

The bridge caved in when a hydraulic jack malfunctioned while girders were being installed on Sunday night, according to the Roads and Highways Department (RHD).

People concerned said that five girders of the bridge had been broken.

Construction work of the bridge has been going on for about two years now, with the contractor, MM Builders, given responsibility for building the bridge.

The estimated cost of building the bridge is about Tk70 lakh.

However, locals complained that the bridge collapsed due to the use of substandard raw materials.

Local resident Gafur Mia said people believed the bridge had collapsed due to the use of low quality materials. He also complained that the construction work of the bridge had been progressing in a sluggish manner.

According to sources, the RHD started the construction of three bridges on the Sunamganj-Jagannathpur road with a budgetary allocation of Tk100 crore in fiscal year 2019-20.

One of those bridges has now collapsed before construction has been completed.

Kazi Nazrul Islam, sub-divisional engineer of Sunamganj RHD, said there would be no obstacle in vehicle movement as there were alternative roads.

He also said that the responsibility of low quality work should be borne by the contractor.

Harunur Rashid, project implementation officer at AM Builders, said the accident happened when the hydraulic jack broke down during the installation of the girders. He said MM Builders would bear the entire cost of the damage, adding that work on the bridge would resume soon. He also denied irregularities in the construction work.

Mostafizur Rahman, deputy assistant engineer of the RHD, who is in charge of the project relating to the three bridges on the Sunamganj-Jagannathpur road, said: “It did not cost the government a single penny. We have not paid any money to the contractor yet. Since the girder is broken, they will bear the responsibility and install it again.”