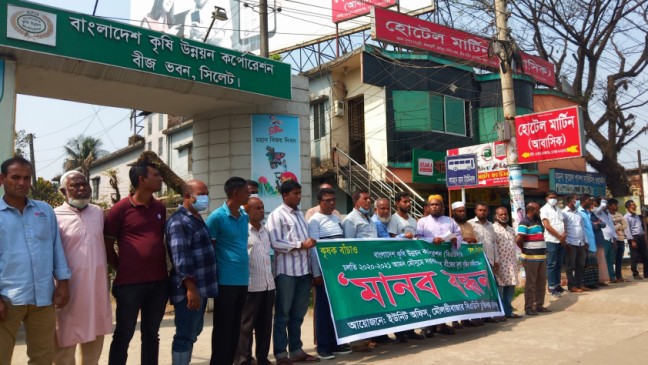 Farmers here on Wednesday demanded increasing the price of Aman seed which are being collected from marginal farmers of Bangladesh Agriculture Development Corporation (BADC), during a human chain formed in front of the BADC office.

Around hundred farmers took part in the programme, reports our correspondent.
Farmers in Sreemangal, Moulvibazar Sadar, Kamalganj and Rajnagar upazilas demanded the same.

The collection price for Aman seed this year is Tk 38 and Tk 40 per kg for regular varieties except BRRI-38. The price was Tk 30 last year which was increased to Tk 32 after farmers demanded, according to BADC.

“Of the four upazilas, 152 Aman farmers produced 800 tonnes of paddy seed but this year the production cost is an estimated Tk 42-43 per kgs, which is more than the collection price,” said Asgar Ali, a farmer of Kamalganj.

“The production cost of Aman seed is at least 30 percent more than the regular production cost. All we want is a fair price which is Tk 50 per kg,” he said.

“The collection price is set by high-level authority and we can’t change it anyway. But as the farmers are demanding, we’ll be sending their message to the top authority to decide in this regard,” said Supriyo Paul, joint director of Sylhet BADC.