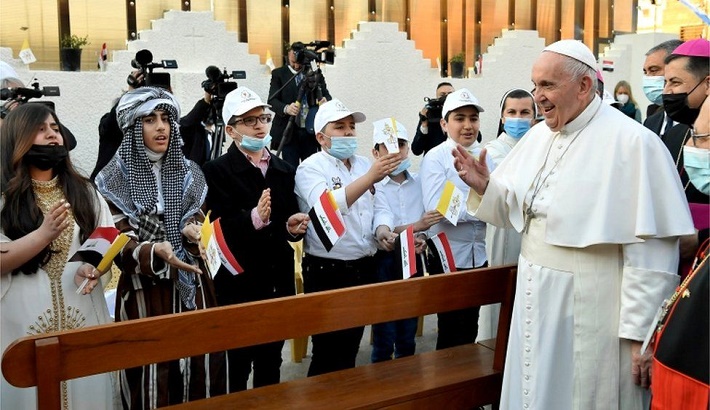 Pope Francis will visit parts of northern Iraq’s Mosul on Sunday that were held by Islamic State (IS) militants on the third day of his historic trip to the country.

Militants overran the region in 2014, destroying historic churches and looting. Christians have been returning there since IS was defeated in 2017.

The Pope will also celebrate Mass at a football stadium in the city of Irbil, with up to 10,000 attendees expected.

There are fears the ritual could become a coronavirus super-spreader event.

Iraq has seen a sharp rise in Covid-19 infections over the past month, and along with security fears over the pontiff’s visit, it is one of his riskiest trips yet.

The 84-year-old leader of the Catholic Church and his entourage have all been vaccinated, but Iraq only received its first batch of doses last week.

The four-day trip, which began on Friday, is the pontiff’s first international excursion since the start of the pandemic more than a year ago, and the first ever papal visit to the country.

Some Shia militant groups have reportedly opposed the visit, suggesting the tour amounts to Western interference in the country’s affairs.

On Sunday, the Pope will visit Mosul – a former IS stronghold for three years – where he will say prayers in Church Square for the victims of the war with the Sunni Muslim militant group, which left tens of thousands of civilians dead.

He will then visit Iraq’s largest church, which was partly destroyed by IS, in nearby Qaraqosh, where Christians have returned since the group’s defeat.

About 10,000 Iraqi Security Forces personnel have been deployed to protect the Pope during his visit, while round-the-clock curfews have also been imposed to limit the spread of Covid.

What message is the Pope delivering?

Since arriving in Baghdad on Friday, Pope Francis has called for an end to violence and extremism and said that Iraq’s dwindling Christian community should have a more prominent role as citizens with full rights, freedoms and responsibilities.