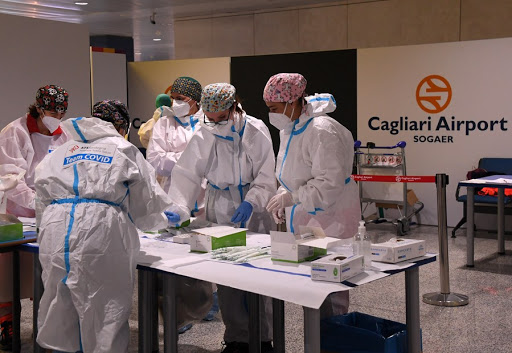 As the pandemic rages on, the overall number of global Covid-19 cases has now surpassed 129 million.

The total case count reached 129,510,295 while the death toll from the virus mounted to 2,826,852 on Friday morning, according to Johns Hopkins University (JHU).

The US, the worst-hit country in terms of active patients and deaths, has so far recorded 30,539,844 cases and 553,120 fatalities, as per the university data.

Six states account for more than 78% of India’s total caseload, which at 12 million is the third-highest in the world. Cases have increased six-fold in less than two months, and deaths — a lagging indicator in the pandemic that follows hospitalisation — are rising too.

The infection rate jumped to 22.94 percent on Thursday from 19.9 of Wednesday’s, when the country recorded 5,358 cases, the highest in many months.

The country’s Covid caseload soared to 617,764 after it recorded its highest-ever single-day case count, according to a handout issued by the Directorate General of Health Services (DGHS).

Bangladesh reported its first cases on March 8 last year and confirmed the first death from the virus 10 days later.

Coronavirus claimed 568 lives in January this year, 281 in February and 638 in March.

The daily surge prompted the Prime Minister’s Office (PMO) to issue an 18-point directive on Monday to prevent the transmission of the virus.

On the same day, the Health Ministry proposed strict measures like partial lockdowns for some places with higher Covid-19 transmission rates.

The government launched a countrywide vaccination campaign on February 7 with doses received from the Serum Institute of India.

Bangladesh inked an agreement with Serum in December last year for acquiring 30 million doses of the Oxford-AstraZeneca vaccine. Serum is supposed to supply the doses between January and June this year – 5 million each month.

Serum institute to sell AstraZeneca to private hospitals at $8/dose