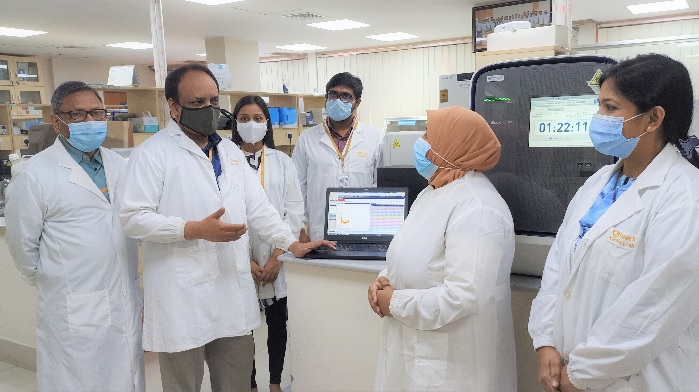 A study carried out by the icddr,b has found that the South African variant of coronavirus has become dominant in Bangladesh.

Scientists at icddr,b analysed genomic sequence of around 57 samples of Covid-19 positive patients between March 18 and 24. Of those, 46 (more than 80 per cent) were found as same as the South African variant of coronavirus.

The icddr,b scientists also analysed genomic sequence of 99 novel coronavirus samples in the previous week (between March 12 and 17)  and found the South African variant in 64 or more than 64 percent samples.

“A dramatic change in the distribution of variants was observed when the South African variant appeared. It became the most prevalent variant during the third week of March 2021 by replacing other variants. Most remarkably, the South African variant occupied 81% of the variants in the fourth week of March 2021. The findings warrant continuous monitoring of genetic variations of SARS/CoV2, which is crucial for vaccine effectiveness and patients management,” said the icddrb on its website on Wednesday (April 7).

In the first week of March (between March 5 and 11), the team analysed genomic sequence of around 30 samples. In that case, there was no existence of South African variant. The samples were collected from 13 districts.

“We have continued genomic sequencing of the samples collected after March 24. The analysis is not ready yet,” Dr Mustafizur Rahman, Senior Scientist and Head, Virology Laboratory, icddr,b, who leads the genome sequence team, said.

Recently, the variants of SARS-CoV-2, especially the UK variant named as B.1.1.7, South African variant named B.1.351, and Brazilian variant named P1/P2 have spread all over the world, according to different studies across the globe.

These variants are said to have increased transmissibility and harbour new genetic changes, which may impact clinical manifestation and vaccine effectiveness, scientists said.

They also stressed that everyone needs to abide by the restrictions recently announced by the Bangladesh government.