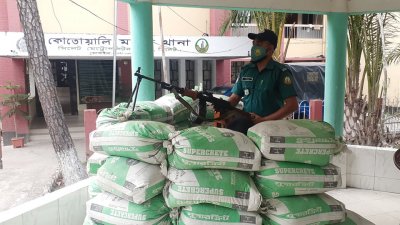 The government on Thursday set up light machine gun posts at all the police stations and outposts in Sylhet Metropolitan Police area to tighten security measures.

Besides, the Sylhet district police have taken initiatives to install LMG posts at all the police stations and outposts under its jurisdiction by Friday.

Officials at SMP and Sylhet district police said that they had taken such initiatives in the backdrop of recent anarchic activities in the country.

They also said that the initiatives were taken as per the direction of the police headquarters following recent attacks targeting different police establishments during Hefazat-e-Islam Bangladesh’s hartal and protests.

SMP deputy commissioner (north) Azbahar Ali Sheikh told New Age that security measures at all the police stations, outposts and other infrastructures in the metropolitan police area were strengthened to avert any kind of untoward incident.

‘Specific number of additional police personnel was deployed at all of the police stations and infrastructures to maintain security measures strictly,’ he added.

He said that the works of installing the LMG posts with sacks full of sand at all the six police stations and all the police outposts under SMP started on Tuesday and the works completed on Thursday.

Sylhet district additional superintendent of police Lutfur Rahman said that they had sent equipment to all the 11 police stations under their jurisdiction on Thursday.

He hoped that installation of LMG posts would be completed by Friday.

2 ‘dacoits’ beaten to death in Habiganj