Hasina urges Obama to work together to eradicate terrorism 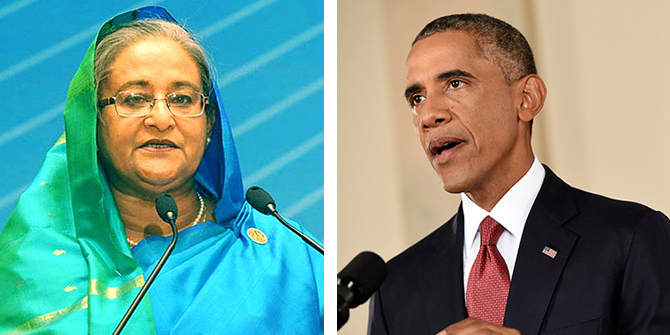 Prime Minister Sheikh Hasina on Monday strongly condemned the deadly terrorist attack on a Florida community club in the United States and called for taking collective efforts to eradicate this hateful menace from society.

“I condemn this dastardly act of terror in the strongest possible term and reiterate my government’s ‘zero tolerance’ policy against any form of terrorism and violent extremism,” she said in a message sent to US President Barack Obama.

The Prime Minister said terrorists must be regarded as terrorists regardless of their colour, creed, origin or orientation. “Let’s redouble our collective efforts to eradicate these hateful menaces from our peace-loving societies,” she said.

Sheikh Hasina said she is shocked and saddened to learn about the deadly terrorist attack on a community club at Orlando, Florida, a few hours ago that took way 50 human lives and injured many.

“My government and people stand shoulder to shoulder with your government and the friendly people of the United States of America at this difficult hour and renew our commitment to work together with you as partners to counter terrorism and violent extremism that have emerged as threats to human civilization,” she said.

The Prime Minister said: “We express our deepest condolence and sympathy to you and through you to the members of the families of these ill-fated victims and to the people of the United States of America … with every life lost in terror, our heart bleeds in pain and grief.”

A US-born man gunned down 50 people and wounded at least 53 at a gay nightclub in Orlando with an assault rifle and a pistol on Sunday. This is the deadliest mass shooting in the United States and worst terror attack since 911.

2016-06-13
editor
Previous: 2 motorcycle thieves held in Sylhet
Next: AL have to pay for Jasod leader’s inclusion in cabinet: Ashraf