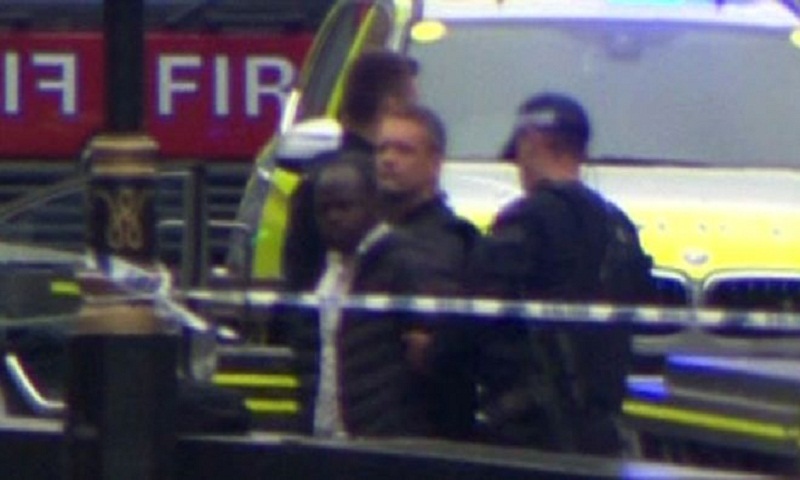 The man being held on suspicion of terrorism after the Westminster car crash has been named as Salih Khater by government sources.
The 29-year-old British citizen, originally from Sudan, is being questioned in south London.

Police have been searching three addresses in Birmingham and Nottingham as part of their investigation.

Three people were injured after the vehicle hit cyclists and pedestrians during Tuesday morning’s rush hour.

The silver Ford Fiesta then crashed into security barriers outside the Houses of Parliament just before 07:40 BST.

He did not co-operate with officers after his arrest, Scotland Yard said.

Two people were taken to hospital after the crash and later discharged while a third was treated for minor injuries at the scene.

What happened on Tuesday?

A number of witnesses said the car, which was travelling westbound in Parliament Square, appeared to deliberately hit members of the public as it swerved into the opposite lane.

Footage released by the BBC showed the moment of the crash. A police officer can be seen jumping over a barrier to get out of the way.

A passenger in the first car behind the cyclists said they had been “thrown everywhere” after being hit at what she estimated to be 25mph.

The car was driven to London from Birmingham the night before, arriving just after midnight on Tuesday.

It then spent nearly five hours in the Tottenham Court Road area before being driven around Westminster for more than 90 minutes before the crash.

The driver was arrested at the scene by armed officers on suspicion of preparing for a terrorist act.

He was detained under the Terrorism Act and taken to a south London police station. Police say their priority is to understand the circumstances of, and motivation for, the crash.

No-one else was in the car when it crashed and no weapons were found in it.

Police are treating it as a terrorist incident “given that this appears to be a deliberate act, the method, and this being an iconic site”, Scotland Yard’s head of counter-terrorism Neil Basu said.