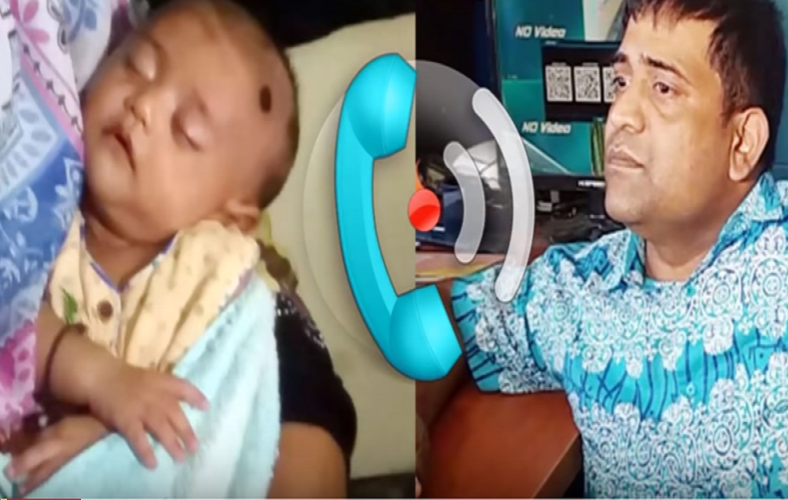 Two doctors have allegedly deceived the parents of a healthy baby who was admitted to a private hospital at Aushkandi in Nabiganj upazila of Habiganj.
The fraudulence came to light with the leaking of an audio conversation of the two doctors.

The doctors and hospital authorities have become desperate to hide the issue after the mobile phones conversation went viral on the social media.

Doctor AHM Khairul Bashar prescribed some medicines with a visit-fee of Tk 500 and advised to the parents to know the condition of the child the next day.

AHM Khairul Bashar advised the child’s mother to admit the children to Mamun Hospital in Moulvibazar immediately and told to contact with doctor Biswajit.

Khairul Bashar asked the mother of the sick children to arrange a telephonic talk with doctor Biswajit via her phone.Though the financial condition is not good, mother Shirin Akhter rushed to Moulvibazar to save the life of her children.

Later, Shirin Akhter find out the doctor and arrange a telephonic talk with among them via her phone.

According to the doctor, the child was admitted to the clinic on that night. Child mother Shirin Akhter doubts the issue watching the conversation between the two doctors on mobile.

The call record option on Shirin Akter’s mobile phone was on during the conversation of two doctors. But the two doctors did not know about it.

In the mobile phone call record, physician Biswajit says, “Dula Bhai, your patient is very good. There is no problem. Baby’s mother is crying continuously.”

After listening to the mobile phone call record, Shirin Akhter came to know the cheating and return home from the clinic with her children the next day.

With tears, Shirin Akhter said that “Person went to the doctor for peace. But they betrayed with me which I can’t accept in any way. I am so poor but lend huge money for the treatment. After the incident, I informed the incident to the hospital authorities but did not get justice.”

Orbit hospital Director Mohibur Rahman Harun said that “For nearly 12 years AHM Khairul Bashar has been carrying out the duties of new-born and child-related disease specialist at the hospital.”

“On August 31, the baby was sent to Sylhet when her mother brought her here. But because of their financial condition, they went to Moulvibazar. Later on this incident, he talked with the baby’s father over phone” he added.