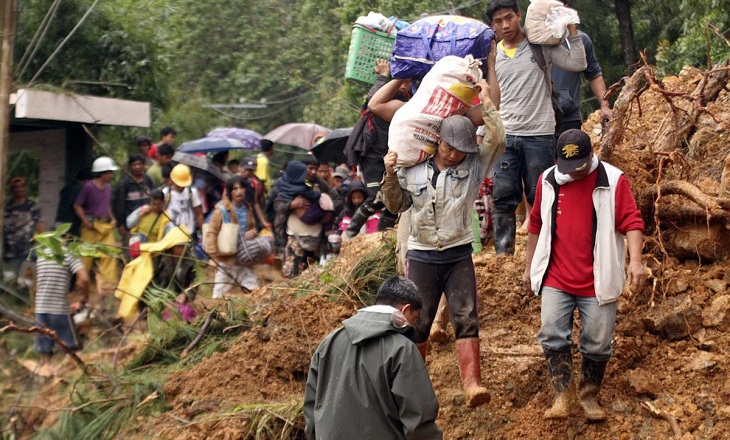 Philippine and Chinese authorities say the death toll from a typhoon has risen to at least 69 with dozens missing.

Mangkhut weakened to a tropical storm Monday morning as it moved deeper into southern China, where rain and strong winds were expected to continue through Tuesday.

Many of the missing in the Philippines are gold miners and their families feared buried in a landslide after seeking shelter in a bunkhouse-turned-chapel in a village in Benguet province.

Mangkhut battered the northern Philippines on Saturday before slamming into southern China on Sunday. It was the most powerful typhoon to hit Hong Kong since 1979, packing winds of 195 kilometers per hour (121 mph).___

Mangkhut has weakened from a typhoon to a tropical storm as it moves deeper into China.

The storm was still affecting southern China’s coast and the provinces of Guangdong, Guangxi and Hainan on Monday morning and rain and strong winds were expected to continue through Tuesday.

Hong Kong residents were being told to stay away from the coastline and be on alert for occasional gales. Bus, ferry and rail services were suspended and almost 900 flights were canceled at the city’s airport, one of the world’s busiest. The South China Morning Post said Hong Kong’s hospitals had to use backup power due to outages caused by the storm.

Mangkhut earlier lashed the Philippines, sparking landslides and building collapses that killed at least 64 people. At least two deaths have been reported in China. As of Monday morning Mangkhut was on track to pass over the Guangxi regional capital of Nanning.

The Hong Kong Observatory reported Mangkhut was the most powerful cyclone to hit the city since 1979, packing maximum sustained gusts of 195 kilometers per hour (121 mph).

Rescuers are resuming work to find people feared trapped by a landslide in a Philippine gold-mining area that was pounded by wind and rain from Typhoon Mangkhut.

The workers used pikes and shovels to dig into the mud Monday morning, with the use of heavy equipment limited on the soaked ground.

Philippine police had said earlier that at least 40 people, mostly gold miners, were feared to have been trapped when part of a mountain slope collapsed on miners’ bunkhouses in a far-flung village of Itogon town in Benguet province. At least seven bodies had been dug out Sunday before the work had ceased during the night.

Mangkhut battered the northern Philippines on Saturday before slamming into southern China. At least 64 deaths were reported in the Philippines and two more in China as of Sunday.

Fifteen people were injured in the nearby gambling enclave of Macau, which closed casinos for the first time. The Hong Kong Observatory warned people to stay away from the Victoria Harbour landmark, where storm surges battered the sandbag-reinforced waterfront.

More than 2.4 million people had been evacuated in Guangdong by Sunday evening to flee the typhoon, according to state media.

The typhoon battered southern China after first battering the northern Philippines, where at least 64 people were killed.

Philippine police say the death toll from Typhoon Mangkhut has climbed to 64.

The national police also say 45 other people are missing and 33 were injured in the massive storm, which battered the northern Philippines on Saturday.

The hardest-hit province was Benguet, where 38 people died, mostly in two landslides, and 37 remain missing.

After blowing past the Philippines, the typhoon lashed Hong Kong and other parts of southern China on Sunday.

State media also cited the Guangdong provincial meteorological station as saying that by Sunday evening, nearly 50,000 fishing boats had been called back to port.

The official Xinhua News Agency says groceries flew off the shelves of supermarkets in the provincial capital of Guangzhou as residents stocked up in preparation for being confined at home by the typhoon.

The massive storm left dozens dead from landslides and drownings as it sliced through the northern Philippines on Saturday.

A Philippine police officer says at least 40 people, mostly gold miners, are feared to have been trapped in a landslide in the country’s north and seven bodies have been dug out by rescuers.

Police Superintendent Pelita Tacio tells The Associated Press that a part of a mountain slope collapsed on the miners’ bunkhouses in a far-flung village of Itogon town in Benguet province as Typhoon Mangkhut’s ferocious winds and rain pounded the gold-mining region on Saturday.

Tacio, who was at the scene of the landslide earlier Sunday, says rescuers found another man but could not immediately pluck his body, which was pinned by rocks and mud.

Typhoon Mangkhut has made landfall in southern China’s Guangdong province, bringing torrential rains and winds of 162 kilometers per hour (100 miles per hour).

The typhoon barreled into the southern Chinese city of Taishan at 5 p.m. Sunday.

In preparation for the storm, southern China evacuated hundreds of thousands of people, suspended high-speed rail services and canceled classes.

The massive storm left at least 28 people dead from landslides and drownings as it sliced through the northern Philippines on Saturday.

The biggest storm this year left at least 28 dead from landslides and drownings as it sliced through the northern Philippines on Saturday.

Nearly half a million people were evacuated from seven cities in Guangdong province, the gambling enclave of Macau closed down casinos for the first time and the Hong Kong Observatory told people to stay away from the Victoria Harbour, where storm surges battered the waterfront reinforced with sandbags. Mangkhut is due to make landfall in Guangdong later Sunday.

The national meteorological center says southern China “will face a severe test caused by wind and rain” and urged officials to prepare for possible disasters.