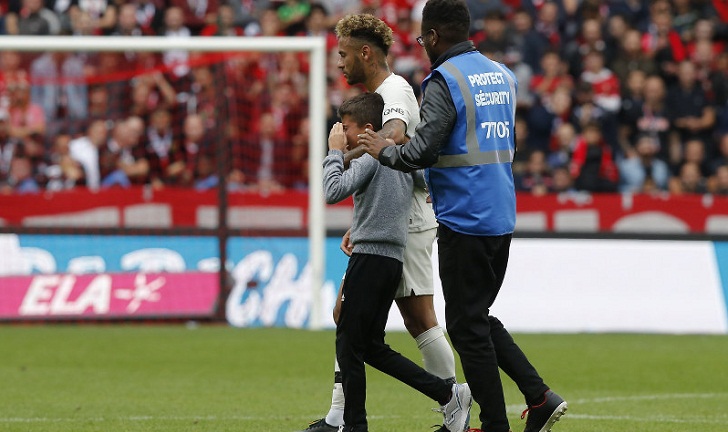 Neymar was whistled off the field on Sunday but showed he held no grudge against Rennes fans by giving his shirt to a young boy who ran across the pitch to hug the Brazil star.

With PSG leading 3-1 in the French league game, Neymar slowly walked back to the Paris Saint-Germain bench in the 90th minute at Rennes – as coach Thomas Tuchel made his final substitution – when the boy escaped security and ran toward the striker.

The boy burst into tears when he reached Neymar and pointed at his shirt. Neymar took the boy under his arm and walked back to the sidelines, gesturing toward security guards to indicate everything was okay.

Neymar then took off his shirt and gave it to the boy, who was taken away by stewards.

Neymar had a mostly anonymous performance before the incident, with a mediocre display in Brittany. Five days after slumping to its first loss this season in a 3-2 Champions League defeat at Liverpool, PSG struggled in the first half but came from behind to win 3-1 and remain perfect in the French league with a sixth consecutive win.

Playing without the suspended Kylian Mbappe, the defending champions faced strong resistance from an inspired home side that defended well and destabilized PSG on the break.

Rennes played with three attacking players and applied early pressure on Gianluigi Buffon’s goal. Mbaye Niang and Ismaila Sarr tested the Italian ‘keeper before Rabiot inadvertently sent the ball into Buffon’s net from a corner after a header from Niang ricocheted off his shoulder in the 11th minute.

Rennes could not build on the momentum and started to play deeper as PSG took control of the match and leveled just before halftime with a low-shot from Julian Draxler’s cut-back pass.

Edinson Cavani hit the post at the start of the second half and Meunier scored at the end of a swift counterattack with a right-footed shot. Subsitute Choupo-Moting then celebrated his league debut with a goal in the 83rd from Meunier’s pass.

Forward Bertrand Traore scored twice as Lyon carried its Champions League form into the French league with a 4-2 win over rival Marseille.

Just days after defeating Manchester City away, Lyon was the better team throughout and extended its unbeaten run at home against Marseille to 11 years.

Houssem Aouar and Nabil Fekir also scored for Lyon, which moved level on points with Marseille and eight points behind PSG.

Traore put Lyon back in the lead in the 51st minute, after Florian Thauvin’s equalizer, and made it 3-1 before winning a penalty converted by Nabil Fekir. Clinton Njie also scored for Marseille, which was reduced to nine men after he picked up an injury and defender Duje Caleta-Car was sent off for a foul on Traore in the 83rd.