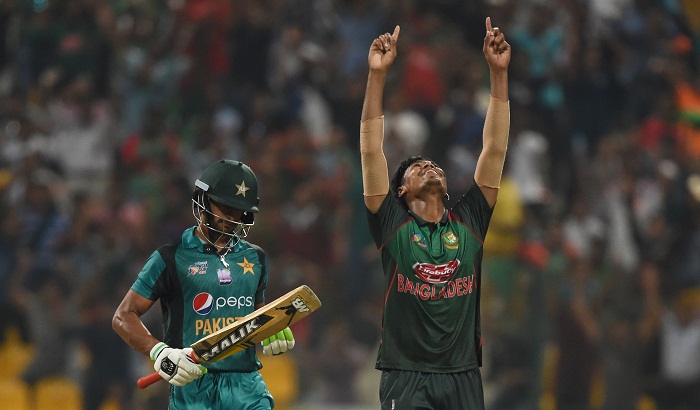 Inspired Bangladesh stormed into Asia Cup final thrashing out Pakistan by 37 runs in the last match of the Super Cup round at Sheikh Zayed Stadium on Wednesday night.

Now the Tigers will play the final game against defending champion India on Friday (September 28) in Dubai.

Tiger bowlers were empowered enough to defend their moderate score 239 by crushing out Pakistan’s batting line up early of the match and finally bundled them out in 202 for nine.

Pakistan has already lost five wickets before scoring 100 against Bangladesh in the must-win match for the both side in Super Four round in Asia Cup at Sheikh Zayed Stadium in Abu Dhabi on Wednesday.

Later, Shoaib Malik came into bat and had a 67-run stand with Imam before dismissed by Rubel Hossain.

After Malik’s dismissal, Imam is fighting along with Asif Ali.

Earlier, Bangladeshi batsmen made total of 239 runs losing all wickets after a batting disaster (3 for 12) after they won the toss and opted to bat at Sheikh Zayed Stadium.

Then, Mushfiqur Rahim and Mohammad Mithun stood strong and steered Bangladesh to 239.

Mushfiqur Rahim was out on 99 off 116, missing a century by one run while Mohammad Mithun notched a half century 60 off 84.

The Mushfiq-Mithun stand added an invaluable 144 for the fourth wicket.

Left-arm paceman Junaid Khan, who replaced Mohammad Amir in the squad, had jolted Bangladesh at the start, dismissing Liton Das (six), Soumya Sarkar (0) and Mominul Haque (five) to reduce them to 12-3.

Junaid finished with 4-19 in his nine incisive overs.

Rahim hit nine boundaries before he was caught behind with just one needed for a second hundred in the tournament, following his 144 against Sri Lanka in the first round.

It was sheer bad luck that he fell in the 42nd over, caught behind off paceman Shaheen Shah who finished with 2-47. Rahim became the first Bangladeshi batsman to be dismissed for 99 in one-day cricket.

Mithun, who added 134 with Rahim against Sri Lanka, hit four boundaries in his 84-ball innings.

The winner of this match will meet defending champions India in Friday’s final in Dubai.