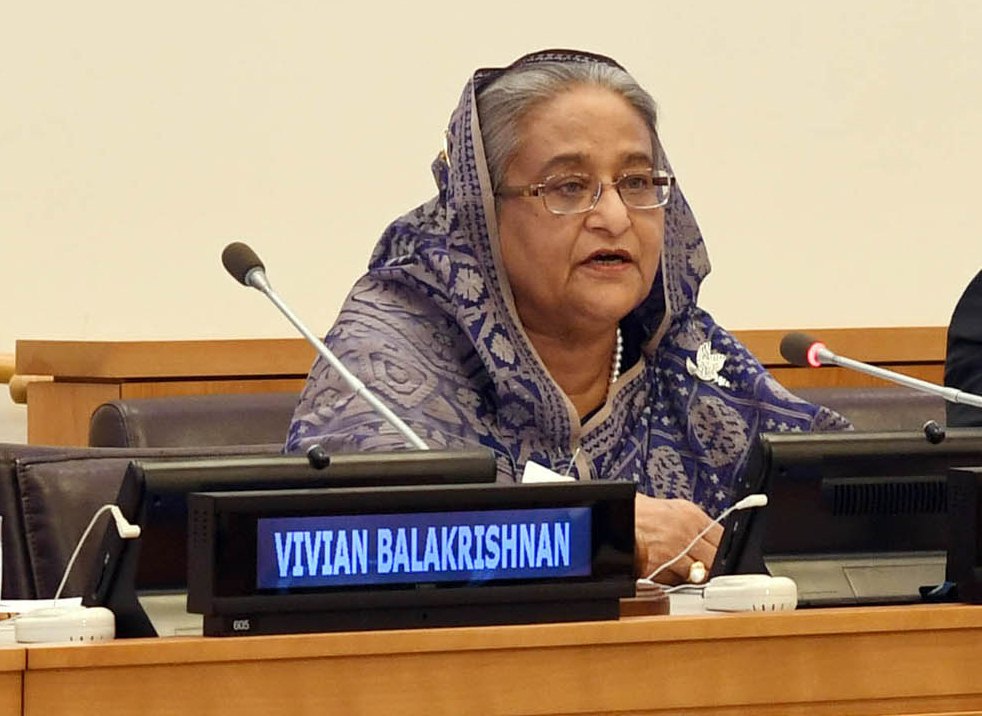 New York, Sept 26 : Prime Minister Sheikh Hasina has stressed the importance of UN peacekeeping reform with adequate authorisation of peacekeepers and making them better equipped as they are facing growing unconventional threats from non-state actors.

“Peacekeepers are now deployed in certain places where there’s no peace to keep. They face growing unconventional threats from non-state actors. UN missions are often working alongside other forces with different standards. These are making UN peacekeeping operations difficult and dangerous,” she said.

The Prime Minister said this while delivering her statement at a High-Level Event for Action for Peacekeeping (A4P) at the initiative of the UN secretary General Antonio Guterres that held at Trusteeship Council Chamber of the UN Headquarters on Tuesday. Antonio Guterres was present.

The Prime Minister said, “They (peacekeepers) should be adequately authorised and equipped to fulfil their mandates. Their commitment and performance should set the benchmark for their deployment. Their safety and security must be improved.”

She said the ‘Declaration of Shared Peacekeeping Commitments’ is an important outcome as it underlines the collective responsibility of all concerned. “It reaffirms the primacy of politics for UN peace operations.”

Hasina said the investment in UN peacekeeping is worth every life it saves. “Reducing costs and personnel can have serious impact on the ground. The concerns of those on the frontline must be heard. Troop- and police-contributing countries should be taken into confidence by the Security Council and the Secretariat.”

The Prime Minister advocated for the meaningful follow-up of the Declaration as the commitment made should be accounted for. Bangladesh stands ready to do its part, she added.

Hasina said many of Bangladeshi peacekeepers have lost their lives on the line of duty.  “Yet our resolve to serve has not been shaken. We can now deploy our peacekeepers in the shortest possible time. We train them well and in advance. They adapt fast to any challenging situation. They work to win the hearts and minds of the people they serve.”

About the safety and security of the Bangladeshi peacekeepers, the Prime Minister said that they should be able to protect civilians where needed.

“To that end, we’ve provided mine-protected vehicles to our troops in Mali with our own resources. We are following suit in other Missions. Our peacekeepers are also advised to reduce their environmental footprint,” the PM told her audience.

Hasina said she took a personal interest in increasing the number of Bangladeshi female peacekeepers. “We’ve deployed our first female helicopter pilots in the Democratic Republic of Congo. This has been a milestone for us. We would be happy to provide more senior leadership at the headquarters and in the field,” she added.

Talking about sexual exploitation and abuse, the Prime Minister firmly said, “We maintain a ‘zero tolerance policy’. I remain committed to the work of the Secretary General’s Circle of Leadership.”

Hasina urged all to work with a positive mindset to uphold the dignity of the peacekeeping mission under the UN.

“UN peacekeeping is a global public good. We must all work with a positive mindset to uphold its dignity. We must respect the beacon of hope it is in the lives of many,” she said.