Find out reason behind repression of Muslims, PM urges OIC

Plight of Rohingyas cannot be ignored, she says 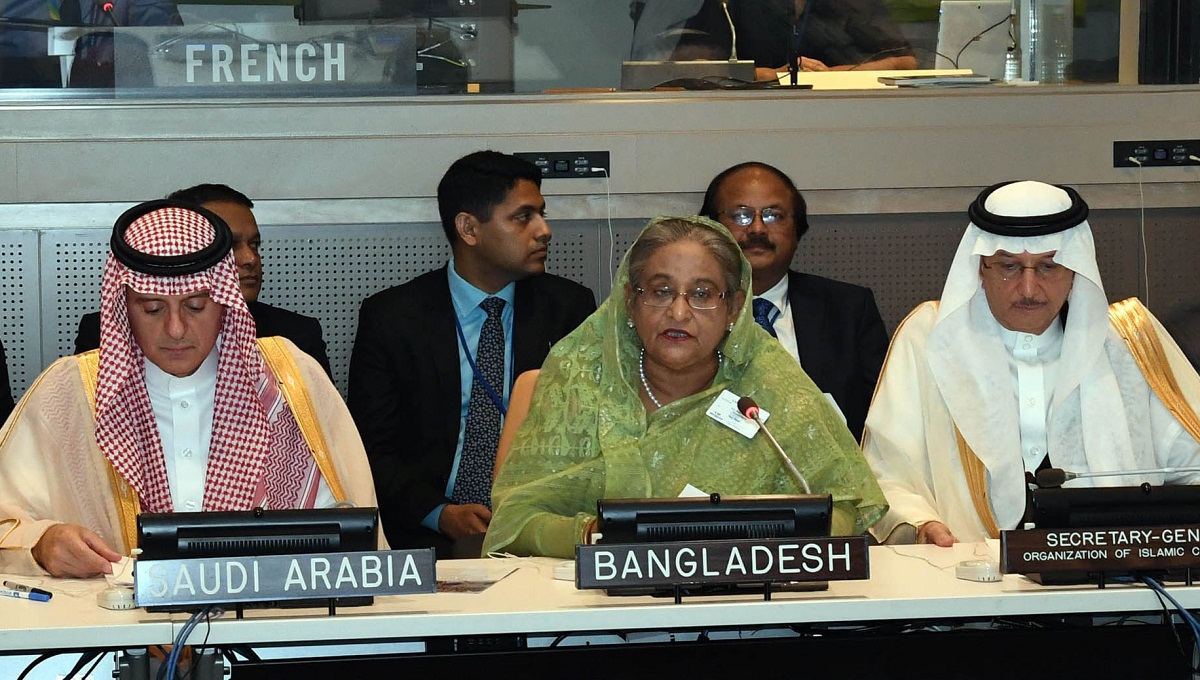 Photo: Prime Minister Sheikh Hasina speaking at a high-level side meeting on the situation of Rohingya minority in Myanmar at the conference room-12 of the UN Headquarters on Thursday.

New York, Sept 27 : Prime Minister Sheikh Hasina on Thursday urged the OIC member states to find out why the Muslims across the world are being subjected to repression, torture and eviction as well as why they are fighting against each other.

“If there’s any problem or discontent, this should be resolved through dialogue bilaterally or regionally. I would like to urge the OIC to play a more proactive role in mitigating the plight of the Muslims,” she said.

The Prime Minister was speaking at a high-level side meeting on the situation of Rohingya minority in Myanmar organised by Permanent Mission of Saudi Arabia and the Organisation of Islamic Cooperation (OIC) Secretariat at the conference room-12 of the UN Headquarters.

She said over a year has passed by since the Rohingya Muslims from the Rakhine State of Myanmar started crossing the border into Bangladesh as victims of ‘genocide’ in their centuries-old homeland. “We can’t just ignore the plight of the forcibly evicted Rohingyas in one of the largest displacements in human history. Currently, we’re hosting over 1.1 million Rohingyas in Bangladesh,” she said.

Sheikh Hasina said the tragic fate of Rohingya Muslims is nothing new, and the current exodus of Rohingyas from Myanmar to Bangladesh is the biggest one as their exodus had been in three phases – 1978, 1991-92 and 2017-18.

Mentioning that the repatriation of the Rohingyas to their homeland alone does not seem to be the sustainable solution to the problem, she underscored the need for collective responsibility and accountability and ensuring rights and privileges of the Rohingyas by Myanmar.

The Prime Minister said it is the people of Bangladesh who are bearing the brunt of the Rohingya crisis time and again. “The government has stood by the Rohingya by opening the border and providing emergency support having been guided by our morale and human principles. However, our resolution to humanity should not be penalised. The prolonged presence of the Rohingyas in Bangladesh poses serious challenges to our economy, environment and security,” she said.

She mentioned that as a responsible neighbour, Bangladesh has been engaged with Myanmar in finding a peaceful solution from the very beginning. “We’ve signed two instruments for repatriation of the Rohingyas from Bangladesh to Myanmar. However, persistent international pressure can only complement the bilateral front to change the well-planned political position of Myanmar for annihilating an entire race.”

She urged the Muslim Ummah to lead the campaign of mounting pressure on Myanmar for creating conducive environment for sustainable repatriation of the Rohingyas from Bangladesh and ensuring accountability of the atrocities committed against them.

She stressed the importance of the OIC member states’ continuation to remain engaged in the United Nations system, including in the United Nations General Assembly and the Human Rights Council, as well as with other relevant international organisations to address the massive human rights violations against the Rohingya Muslims.

“Above all, we need to solve the issue at the earliest,” she added.

Mentioning that she proposed a five-point action in last September for resolving the Rohingya crisis peacefully, the Prime Minister said, “It’s a matter of great regret that the repatriation process is yet to start.”

She thanked the OIC member states for taking some concrete steps over the year.

“I would like to reiterate that the Rohingya crisis is a political one deeply rooted in Myanmar. Thus, its solution has to be found in Myanmar,” she said.