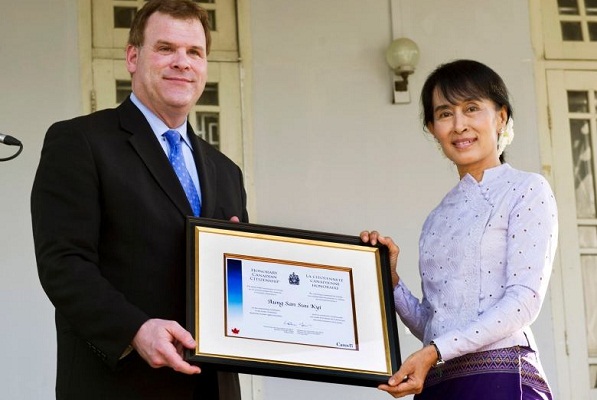 More and more Canadian politicians have been calling on Ottawa to revoke the honour bestowed on the de facto Myanmar leader in 2007 over her complicity in the brutal crackdown of the Rohingya people.

A United Nations fact-finding mission recently found the Myanmar military was committing genocide against the minority Muslim population and other ethnic minorities, and that Suu Kyi had failed in her duty to protect her own citizens.

Yesterday, Prime Minister Justin Trudeau suggested Parliament could consider revoking her honorary Canadian citizenship, but that he believes such a move would do little to ease the humanitarian crisis afflicting the Rohingya people.

Andrew Leslie, parliamentary secretary to Foreign Affairs Minister Chrystia Freeland, said the next steps are not immediately clear, since this is “new ground.”

“Keeping in mind this is the will of Parliament, now the machinery of government will actually chew over the details of what specifically is required to implement,” he said.

Last week, MPs from all parties unanimously adopted a motion condemning the acts of the Myanmar military against Rohingya Muslims as an act of genocide.

The UN report names six military commanders in Myanmar who should be investigated for genocide in Rakhine state, and crimes against humanity in other areas, calling their actions “shocking for their horrifying nature and ubiquity.”

“Many of these violations undoubtedly amount to the gravest crimes under international law,” it read.

The report also condemns Suu Kyi for failing to use her power or moral authority to prevent the persecution of the Rohingya and protect the civilian population. Instead, civilian authorities have spread false narratives, allowed hate speech to flourish and blocked independent investigations, the report says.

Prime Minister Justin Trudeau said the symbolic gesture won’t do much to ease the suffering of the Rohingya.

“Whether she has citizenship or not, it doesn’t help the Rohingya in any degree,” he said. “Parliament granted her citizenship, Parliament can take it away. But we’re focused on helping the millions of people who are suffering either in place or as refugees.”

Freeland’s spokesman Adam Austen said the government supported the motion, put forward by the Bloc Quebecois, “in response to her continued failure to speak out against the genocide of the Rohingya, a crime being committed by the military with which she shares power.”

“We will continue to support the Rohingya people through humanitarian assistance, targeted sanctions against Myanmar’s generals and by pushing for accountability for those responsible through an appropriate international body,” he said.

Tens of thousands of Rohingya are believed dead and more than 700,000 Rohingya have been forced to flee to neighbouring Bangladesh, where they are living in squalid and overcrowded refugee camps.

Today in Geneva, the United Nations Human Rights Council decided to create a new panel to expedite criminal prosecutions against Myanmar’s military commanders involved in the brutal crackdown against the Rohingya.

The council adopted a resolution to set up a system to collect and analyze evidence and prepare files to make it easier for prosecutors to bring cases to trial in national, regional or international courts.