She calls upon int’l community to resolve Rohingya problem soon 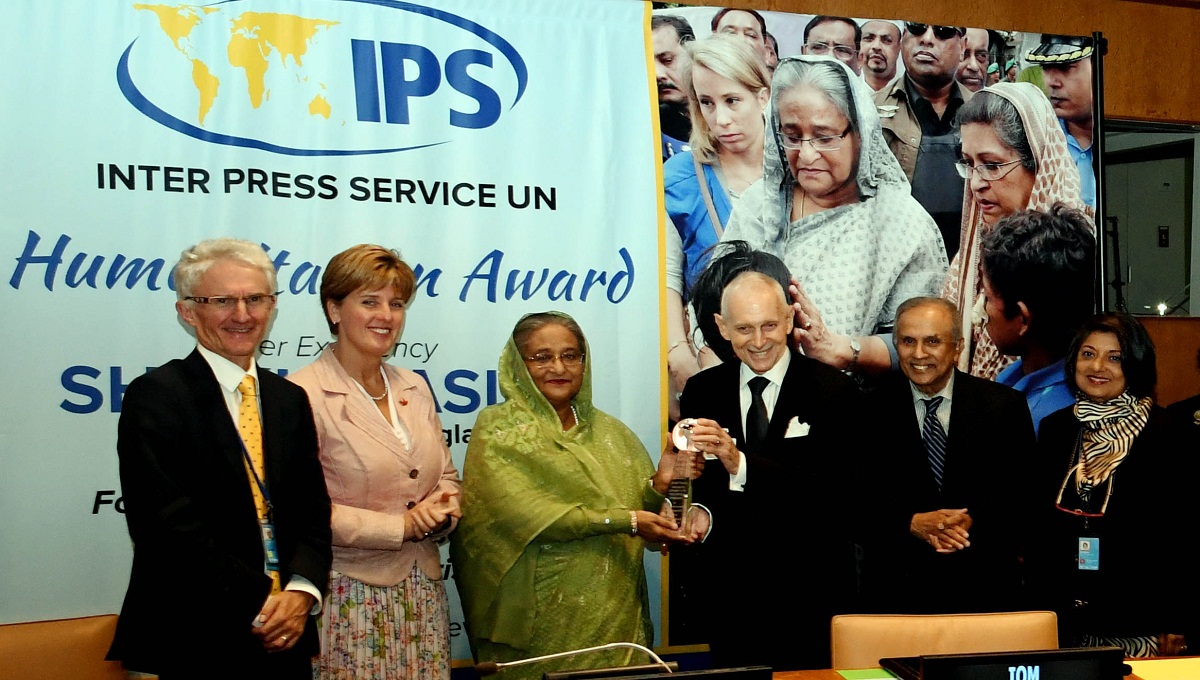 Photo: Prime Minister Sheikh Hasina receiving international awards – the IPS International Achievement Award for her humanitarian and responsible policy in hosting the Rohingyas and for her farsighted leadership over the Rohingya issue respectively.

New York, Sept 28 : Prime Minister Sheikh Hasina has received two international awards – the IPS International Achievement Award and the 2018 Special Distinction Award for Leadership – for her humanitarian and responsible policy in hosting the Rohingyas and for her farsighted leadership over the Rohingya issue respectively.

The Inter Press Service (IPS), one of the world’s leading news agencies, and the Global Hope Coalition, a network of three not-for-profit foundations based in New York, Zurich and Hong Kong honoured her with the two awards on Thursday.

Director General of International Organization for Migration Ambassador William Lacy Swing handed over to Sheikh Hasina the IPS International Achievement Award at a function held at the United Nations Headquarters.

Speaking at the IPS award-giving function, Prime Minister Sheikh Hasina dedicated this award to the people of Bangladesh who have opened their hearts and houses to shelter 1.1 million traumatised forcibly displaced Myanmar nationals.

Hasina said she believes that it is the duty of all responsible nations to show humanity to the distressed and displaced people around the world.

She said it is important that a conducive environment is created in Myanmar for ensuring safety, dignity, livelihood options and re-integration process for the return of the Rohingyas to Myanmar.

“The causes of the crisis is rooted in Myanmar. Hence, the solution is also to be found in Myanmar…..the international community has a clear obligation to collectively address the source of the problem in Myanmar and engage effectively with its government to prevent further exodus,” she added.

“The voluntary return of Rohingyas can only be ensured with collective actions by the international community to ensure prevention of repetition of atrocity crimes against ethnic and religious minorities in Myanmar by establishing international, independent and impartial mechanism to put accountability into effect,” Hasina said.

Speaking on another award-giving ceremony, the Prime Minister also dedicated this award to the people of Bangladesh, who supported and opened their houses and shared their food with the Rohingyas during the critical time.

“I wish the world never had to witness the worst form of violence and atrocities that has been committed against the Rohingyas in Myanmar. It stunned me, as it did to the billions of other conscience minds throughout the world,” she said.

Hasina said the mass exodus of those persecuted people soon turned out to be the fastest movement of displaced people in the recent history. The recent report of the United Nations Fact Finding Mission as mandated by the Human Rights Council has documented incidents of ‘ethnic cleansing’ and ‘genocide’.

“The prolonged presence of the Rohingyas in Bangladesh poses serious challenges to our economy, environment and security. The crucial focus of our emerging nation is being largely diverted for its resolve,” she said.

Bangladesh has signed two instruments with Myanmar for repatriation of the Rohingyas. However, the repatriation process is yet to begin, the Prime Minister said.

“I call upon the international community to continue their efforts in creating pressure and resolving the problem at the earliest,” she said.