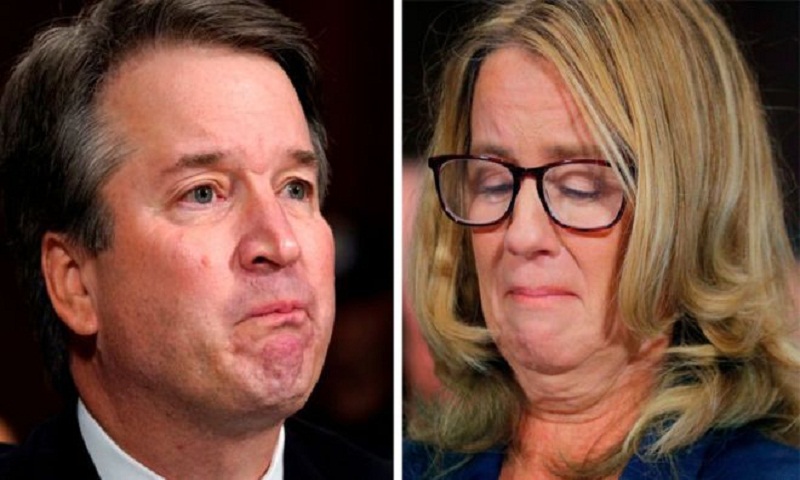 President Donald Trump has ordered an FBI investigation into sexual misconduct allegations against his nominee for the US Supreme Court.
A Senate committee earlier voted to approve Brett Kavanaugh’s nomination to the top US court.

But a Republican member only backed the move on the understanding that such an inquiry would occur.

As a result, a full Senate vote on Judge Kavanaugh’s confirmation has been delayed for up to a week.

On Thursday, the committee heard testimony from Christine Blasey Ford, a professor of psychology in California, who says Judge Kavanaugh sexually assaulted her when they were teenagers in the 1980s.

Judge Kavanaugh also testified, angrily rejecting the allegation he had ever assaulted her or anyone else. He accused Democrats of politicising the process and harming his family and good name.

Despite ordering the FBI investigation, President Trump has continued to defend Judge Kavanaugh.

What will the investigation do?

Announcing the move on Friday, President Trump said: “I’ve ordered the FBI to conduct a supplemental investigation to update Judge Kavanaugh’s file. As the Senate has requested, this update must be limited in scope and completed in less than one week.”

The inquiry will involve the FBI reopening its previously completed background check on Judge Kavanaugh. This might mean going back to old witnesses – or speaking to new ones.

Friday saw Republicans on the Senate Judiciary Committee throw out Democrat attempts to subpoena Mark Judge, a friend of Judge Kavanaugh who Dr Ford said had witnessed the assault on her 36 years ago.

Mr Judge had told the committee in a written statement that he did not recall any such incident.

Mr Judge’s lawyer Barbara Van Gelder said: “If the FBI or any law enforcement agency requests Mr Judge’s co-operation, he will answer any and all questions posed to him.”

Responding to President Trump’s statement, Judge Kavanaugh said “I’ve done everything they have requested and will continue to co-operate”.

Dr Ford’s lawyer, Debra Katz, said her client welcomed the step but questioned the time limit of a week.

“A thorough FBI investigation is critical to developing all the relevant facts… No artificial limits as to time or scope should be imposed on this investigation.”

What led to this?

Friday saw the Senate Judiciary Committee split along party lines in a vote on passing the nomination to the full Senate.

Democrats accused the 11 Republicans of attempting to rush the process, while Republicans countered that the 10 Democrats were using the allegations against Judge Kavanaugh in an attempt to delay – and ultimately block – the conservative judge from joining the Supreme Court.

Arizona Republican Jeff Flake told the committee that he would back the motion to send Judge Kavanaugh’s nomination for a full vote on the Senate floor – but would not support his confirmation in the Senate without the additional FBI inquiry.

The vote then went ahead, with all 11 Republicans including Mr Flake in favour and all 10 Democrats voting against.

After the vote, the committee said it was requesting that Mr Trump order an additional background investigation “limited to current credible allegations against the nominee and must be completed no later than one week from today”.

Mr Flake began the session by saying he would back Judge Kavanaugh but on his way to the committee room he was berated by two women who said they were victims of sexual violence and urged him to change his mind.

Why is this vote so important?

The Supreme Court plays a vital role in US political life. Appointed for life, its nine members have the final say on US law.

This includes highly contentious social issues, such as abortion, and challenges to government policy.

Judge Kavanaugh’s appointment could tilt the balance in favour of conservatives for years to come.

Republicans control the Senate by a narrow 51-49 majority. Without the support of Mr Flake and one other Republican senator – and assuming all Democrats vote against – the confirmation of Judge Kavanaugh cannot occur.

What are the other allegations against Kavanaugh?

Aside from Dr Ford, they are:

Deborah Ramirez. The former Yale University student has said that Brett Kavanaugh once exposed himself to her at a dormitory party in the 1980s. She alleges the incident occurred during a drinking game and remembers Brett Kavanaugh standing to her right and laughing

Julie Swetnick. A Washington DC resident. In a sworn affidavit, she alleges Brett Kavanaugh was involved in the drugging and sexual assault of girls at house parties in the 1980s. She says she was the victim of a gang rape in 1982 at a party attended by the now-Supreme Court nominee

Anonymous. A woman sent a letter to a Colorado senator alleging her daughter had witnessed Judge Kavanaugh pushing a woman he was dating “very aggressively and sexually” against a wall in 1998

Judge Kavanaugh denies these allegations, and on Thursday called Ms Swetnick’s allegation “a joke” and “a farce”.