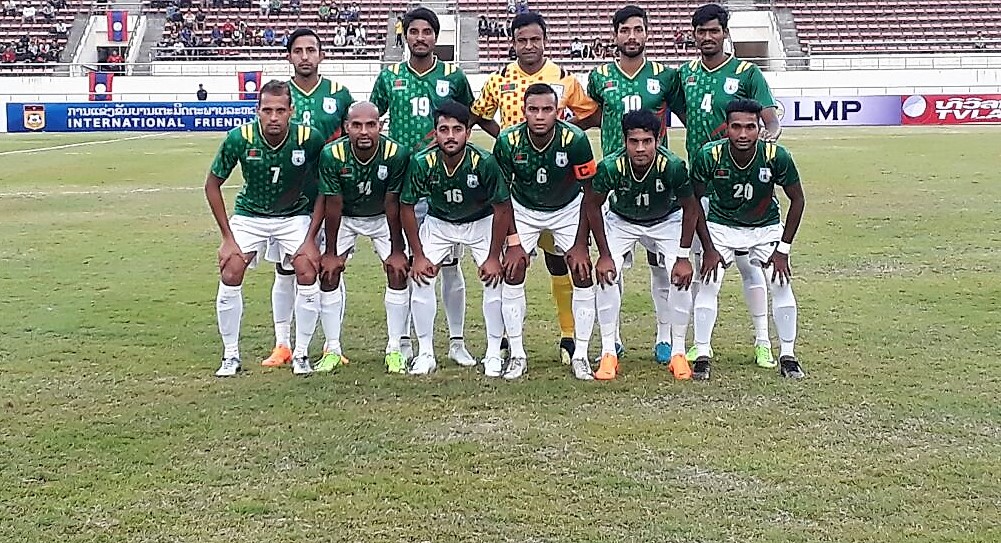 The tournament opener was played between hosts Bangladesh and visitors Laos where the home boys made a good start to their Gold Cup campaign with 1-0 victory.

“I formally announce the kick off of Bangabandhu International Gold Cup today,” AMA Muhith said during his opening speech.

Bangladesh Football Federation President Kazi Salahuddin and officials of K-Sports, the rights holder of the tournament, were also present during the inauguration ceremony.

The win on Monday put Bangladesh one step closer to the semi-finals as they have only one more match against Philippines in Group B.

Bangladesh coach Jamie Day set up an aggressive approach with 4-4-2 formation in the field with Jamal Bhuiyan leading the side whereas Laos deployed a more defensive measure with 4-4-1-1 formation.

Bangladesh forwards Mahbubur Rahman Sufil and Md Nabib Newaz Jibon began the match with promising attacks. The duo created few half chances in the early minutes but the lack of finish touches held the score 0-0.

Laos almost gave Bangladesh a shock goal when they penetrated Bangladesh’s defence and took a direct shot to the post. However, Bangladesh goalkeeper Ashraful Islam Rana easily grabbed the ball to upset the visitors.

The first half ended goalless.

The second half also started with attacks from Bangladesh booters. The rejuvenated Bangladesh side were dominating the field and their aggression paid off eventually.

In the 60th minute of the match, Jibon took two consecutive shots in Laos’ post and the touring team’s goalkeeper Sayamanolinh Paseuth managed to block the shots. However, the ball didn’t get cleared by Laos defenders and Bangladesh’s midfielder Biplu Ahmed utilised the opportunity and flicked the ball in Laos’ nets.

Laos fought well till the last minute but Bangladesh had the last laugh of the day with 1-0 victory.

2018-10-01
Mr. Admin
Previous: BNP to lose existence if it boycotts polls: Muhith
Next: Shamsuzzaman made Bangabandhu Chair Professor at IU