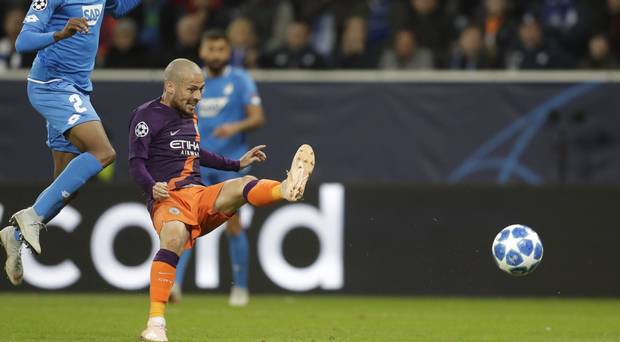 Hoffenheim were unable to defend their 1-0 lead as goals from Sergio Aguero and David Silve secured Manchester City’s first win in Europe’s elite competition this season.

However, things started other than expected as hosts Hoffenheim ensured a fairy tale start into the encounter after Ishak Belfodil broke the deadlock from Kerem Demirbay’s square pass with just 44 seconds played.

It was a short-lived joy for Hoffenheim though as Manchester City rallied back seven minutes later when Leroy Sane’s assist allowed Aguero to tap home the equalizer from very close range.

The visitors increased the pressure and came to a number of chances as Raheem Sterling and Aguero tested Hoffenheim goalkeeper Oliver Baumann with promising efforts.

As the match progressed, Hoffenheim were unable to hold the pace but they defended well and gave the “Citizens” a hard time to take a 1-1 draw into the half time.

After the restart, Pep Guardiola’s men assumed control of the proceedings on the pitch whereas the hosts defended deep and focused on fast breaks.

Manchester City’s efforts paid off in the closing period when Silva forced a turn-over from Stefan Posch to slot home the 2-1 decider to put the result beyond doubt from inside the box.

“Despite absences, we did well. Manchester City reacted how we expected them to in the build-up play. Tactically, I saw a very good performance from my team who created chances against a world-class team,” Hoffenheim head coach Julian Nagelsmann said.

“Hoffenheim are so well organised defensively, with the ball they are so strong. It was not easy to find it, but at end we found the right moment to win the game,” Manchester City head coach Pep Guardiola said.