Bangladesh will no longer depend on others: PM 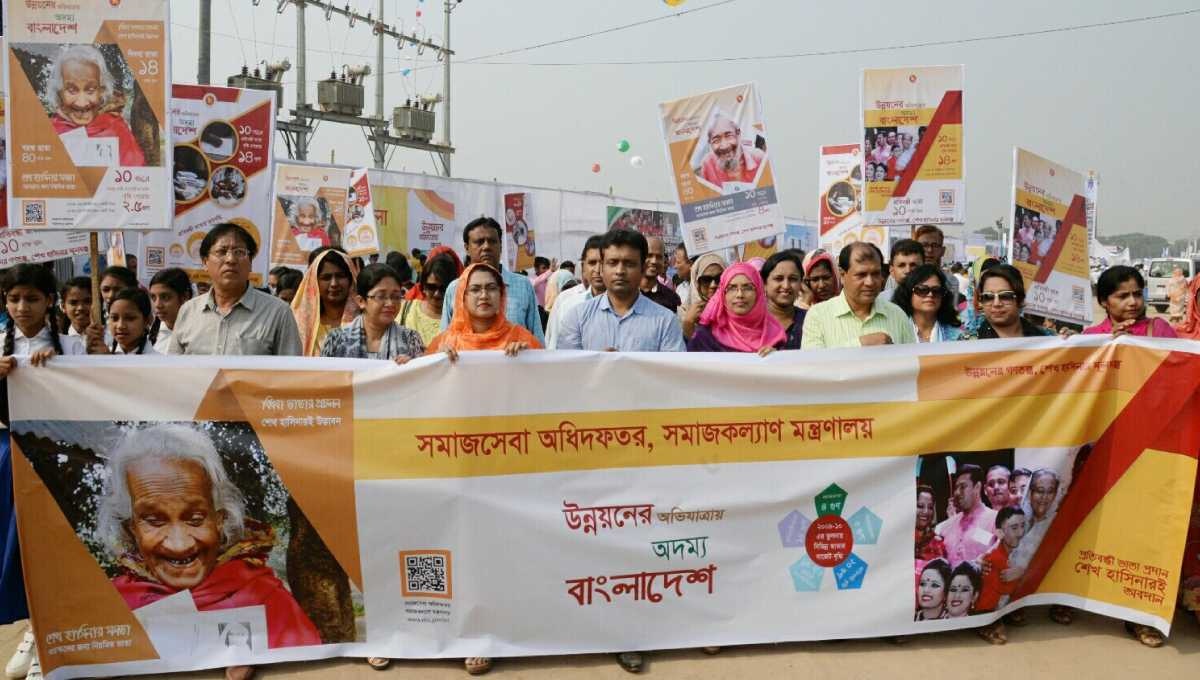 Photo: Organisers bring out a colourfull rally from the field of International Trade Fair in Agargaon, Dhaka on Thursday, October 4, 2018.

Dhaka, Oct 4 : Mentioning that Bangladesh will not remain dependent on others, Prime Minister Sheikh Hasina on Thursday said her government has taken all the necessary plans and is working accordingly so that the country can achieve a greater dignity in the global arena.

“Our goal is to improve the living standard of each person of the country, including the grassroots ones and present them a decent life,” she said while inaugurating the 4th countrywide national Development Fair.

The Prime Minister opened the fair through videoconferencing from her official residence Ganobhaban here.

The three-day fair began in the capital and in all the district and upazila headquarters across the country with the slogan ‘Indomitable Bangladesh in March towards Development, aiming to showcase the development activities of the present government.

“Now Bangladesh can implement 90 percent of its budget with its own financing, and the country achieved not only self-sufficiency in food but also become food-surplus one. Every sector is witnessing development,” she said.

The Prime Minister said the people of the country witnessed a lot of changes in their living standard during last 10 years adding that her party announced the charter of change in its election manifesto before the 2008 general election.

Branding the Awami League’s 1996-2001 rule as a golden time for Bangladesh, she said her party could not assume power despite getting higher votes in the 2001 election due to a deep-rooted conspiracy.

She also said the government has been working not only for the present time, but also for the new and future generations so that they can get a better living condition.

The Prime Minister said her government reduced the poverty rate to 21 percent from 40 percent and increased the power generation capacity to 20,000 megawatts.

About the education sector, she said the pass rate in the SSC examination has increased significantly, but still the students are lagging behind in a number of subjects.

To overcome the situation, the Prime Minister said, Online Digital Lessons (Online Digital Path Sahayika) on three subjects — Bengali, Mathematics and English — have been introduced in the fair this year for the SSC examinees.

“We don’t want anyone to lag behind. So, we’ve taken special steps to introduce Online Digital Lessons in the development fair this year. It’s a gift for the SSC examinees from my part. That means we’ve taken measures so that they can take lessons online on these subjects,” she said adding that such online digital lessons will be introduced on other subjects in phases.

Hasina said her government has already made an online language app from where people, particularly the overseas job seekers, can learn 10 languages.

While talking to the people of Pirganj, the Prime Minister assured them of establishing an agricultural university in the northern region.

In the capital, the fair is being held at the field of International Trade Fair in Agargaon area.

Development successes achieved in different sectors under the dynamic and farsighted leadership of Prime Minister Sheikh Hasina are exhibited in the countrywide fair.

Besides, 10 special initiatives taken by the Prime Minister, international recognitions and successes, the Visions 2021 and 2041, Bangabandhu Satellite, mega projects, including the Padma Bridge and Rooppur Nuclear Power Plant, and other investment prospects are displayed in the fair.

During the fair, the Mass Communication Directorate will project the government’s successes among people through its district offices, while Bangladesh Betar will air the government’s development activities.

Various government offices, agencies, banks, and insurance and other financial institutions joined the district and upazila-level fair, arranged by the local administrations.

During the videoconferencing, the Prime Minister talked to local people from four upazilas — Amtoliupazila of Barguna, Fakirhat of Bagerhat, Lohagora of Narail and Pirganj of Rangpur.

Principal Secretary to the Prime Minister’s Office (PMO) MdNojiburRahman conducted the event, while Principal Coordinator for SDGs Affairs at the PMO MdAbulKalam Azad made an audio-video presentation depicting the major development successes achieved in the last 10 years under the present government.