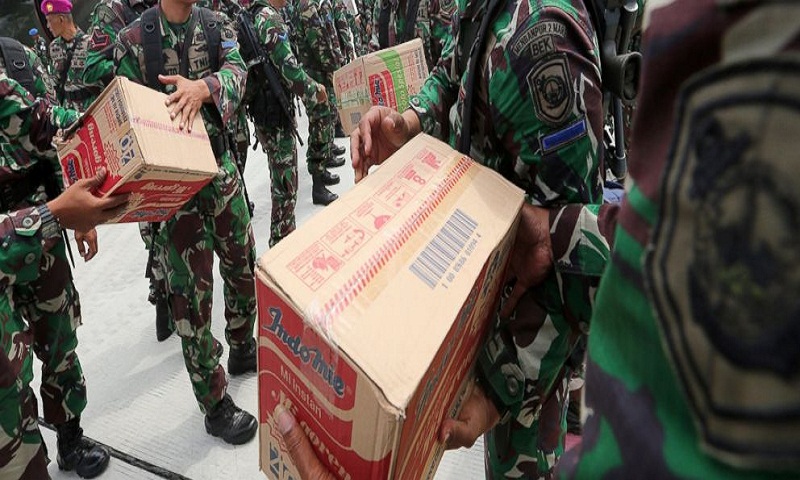 Nugroho said other victims still are buried in the mud and debris and have not yet been recovered.

Indonesian police say 92 people have been arrested for looting goods in areas devastated by an earthquake and tsunami in Central Sulawesi province.

National police Brig. Gen. Dedi Prasetyo said Thursday security will be increased to ensure law and order in Palu, the largest city in the disaster zone.

Local television reported the 92 people detained were caught with goods including motor oil, tires, ceramic tiles, and farming equipment. They were from Palu and the surrounding districts struck by the disasters last Friday.

Aid has been slow to reach survivors, and desperate villagers have stormed into shops to grab food supplies. Authorities have said villagers should only take food and that shops can be compensated later.

Prasetyo noted that the president has encouraged economic activities to restart but that businesses can’t do that without security.

An airport damaged by the earthquake in central Indonesia is expected to re-open to civilian traffic later Thursday.

Indonesian officials expect Palu’s airport to re-open later in the day as the Indonesian military is bringing in more troops to assist with security and the search effort.

Lt. Col. Agus Hariyanto said 100 marines landed Thursday at Palu airport and 200 more were on their way. The military planes are also being used to evacuate injured people and other survivors from Palu, the biggest city in the earthquake-hit region.

Among those leaving are a group of students attending an Islamic competition in the Sumatran city of Medan. Fitriani, a student from Palu who goes by one name, said his group survived the disaster but wasn’t sure they could attend the competition until they were told they could board the military plane.

Life is on hold for thousands living in tents and shelters in the Indonesian city hit by a powerful earthquake and tsunami.

They are unsure when they’ll be able to rebuild and spend hours each day often futilely trying to secure necessities such as fuel for generators.

Residents whose homes had been destroyed had little but uncertainty on the seventh day since the disasters. But they also had hope more aid would pour into the city of Palu and the surrounding Donggala district on the island of Sulawesi.

The official toll has surpassed 1,400 deaths with thousands injured and 70,000 residents displaced. The death toll was expected to increase, but officials said rescue crews had reached all affected areas.

The U.N. announced a $15 million allocation to bolster relief efforts.