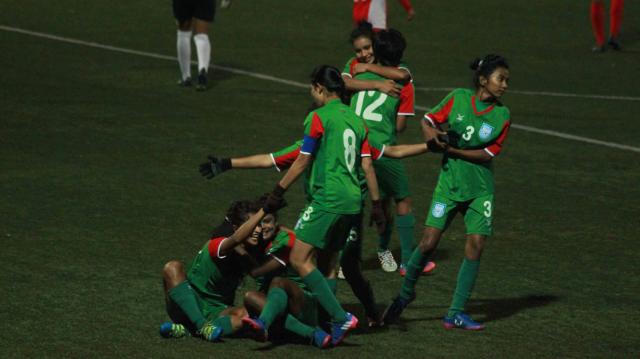 Bangladesh clinched the six-nation maiden SAFF U-18 Women’s crown with all-win record beating Nepal by 1-0 goal in the final at the floodlit Changlimithang Stadium in Thimphu, Bhutan on Sunday.

This was the 2nd consecutive victory for Bangladesh team against Nepal in the ongoing SAFF Championship after beating the Himalayan nation by 2-1 goals in group match.

Siraj Jahan Shopna of Bangladesh was adjudged the highest scorer of the tournament scoring eight goals.

With the day’s feat, Bangladesh women’s team somehow got relieved from their shocking defeat to India in the SAFF U-15 Championship final at the same venue last August.

Bangladesh reached the final eliminating hosts Bhutan 4-0 goals in the 2nd semifinal last Friday while Nepal reached the final denying the South Asian giant India beating them by 3-1 goals in a penalty shootout in the 1st semifinal after 1-1 draw in the stipulated period and also in the extra time.

In a message he said, “This victory will remain as a glittering start in our history and will take the country’s football forward.”