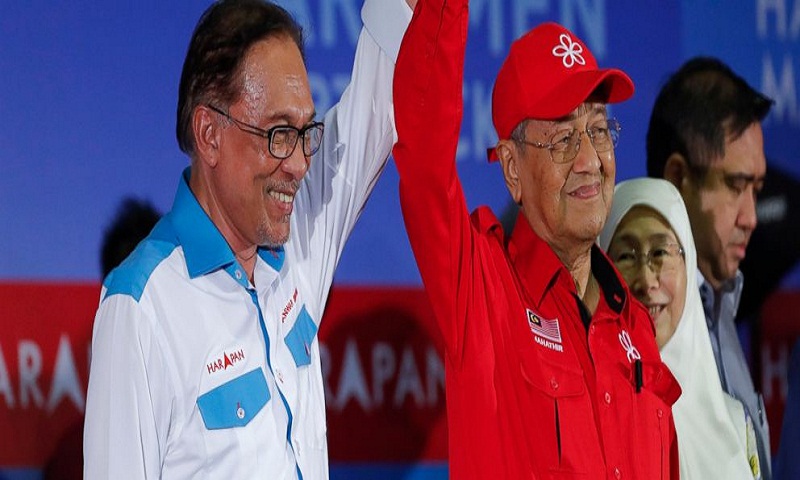 Malaysian Prime Minister Mahathir Mohamad is campaigning for his designated successor and former foe Anwar Ibrahim, urging voters to support Anwar’s return to active politics.
Mahathir’s appearance at a late night political rally Monday marked the first time in two decades that the two shared the same stage, after setting aside a bitter political feud to form an alliance that won a stunning victory in national elections in May.

Mahathir, 93, was elected a second time to the premiership, becoming the world’s oldest leader in the Malaysia’s first transition of power between parties since independence from Britain in 1957.

Anwar couldn’t participate in the polls due to a 2015 conviction for sodomy that he alleged was politically motivated, but he was freed and pardoned by King Muhammad V days after the general election.

Anwar was once a high-flying member of the former ruling coalition but was convicted of sodomy and corruption after a power struggle in 1998 with Mahathir, who was prime minister for 22 years until 2003. Anwar said the charges were concocted to destroy his political career.

The unlikely partnership with Mahathir — under the banner of the Alliance of Hope — was put into motion by a massive corruption at a state investment fund that prompted Mahathir to turn on his former party and return to politics.

In Sunday’s parliamentary by-election to fill a vacant seat for the southern coastal town of Port Dickson, Anwar is expected to easily complete his bid to return to parliament and prepare for his eventual takeover from Mahathir. He faces six other candidates.

Mahathir had earlier said he would not go to Port Dickson to campaign for Anwar because the race was a minor by-election. He later changed his mind, a move that appeared symbolic and a way show that the past conflict had been buried.

“I hope that in this by-election, victory will be given to the Alliance of Hope, to Anwar. I hope that we can continue to work together…not for Mahathir or Anwar but for our beloved country,” Mahathir told about 2,000 people seated in a large tent for the rally.

Mahathir’s spoke little about Anwar, using most of his speech to promote a united government to tackle huge national debts due to corruption under the previous government.

Anwar, in his speech, paid tribute to Mahathir as a statesman who helped save the country from the brink of economic destruction. He reiterated that he will focus on parliamentary reforms and has no intention of interfering with Mahathir’s governance.

“In this current situation, it is better for Mahathir to lead the country. I say this with all humility. I love him as a father and as a leader. I fought against him and now I accept that he is the best man to lead Malaysia now,” Anwar said.

Mahathir has said he expects to be in office for at least two years and will keep his promise to hand over power to Anwar.