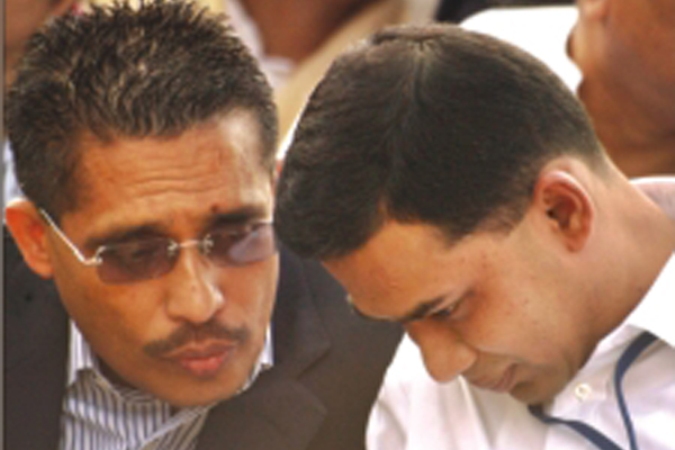 After a long wait for over 14 years, a speedy trial tribunal on Wednesday sentenced 19 people to death and 19 others, including BNP acting Chairman Tarique Rahman, to life imprisonment in two cases filed over the August 21 grenade attack on an Awami League rally in the capital in 2004.

Talking to reporters after the verdict, Kajal said they also sought death penalty for Tarique Rahman in the cases. “We’ll appeal against the judgment with the higher court,” he said.

Meanwhile, defence lawyer Sanaullah Mia said they were disappointed at the verdict.

He said Tarique, Babar, Salam and others were sentenced ‘illegally’.

Replying to a query, Sanaullah said the verdict against Tarique will be challenged once he returns home.

Of the charge-sheeted accused, Jamaat secretary general Ali Ahsan Mohammad Mojaheed, and militant leaders Mufti Abdul Hannan and Sharif Shahedul Alam alias Bipul– were dropped from the cases as they had been executed after convictions in other cases.

Besides, Tarique, Harris Chowdhury, former BNP MP Mofazzal Hossain Kaikobad and 15 others have been on the run.

Thirty-one accused, including Babar and Salam, were produced before the tribunal from a Gazipur jail before the delivery of the verdict.

They were brought to the tribunal from Kashimpur Central Jail in Gazipur in three prison vans around 11:20am.

Meanwhile, security was beefed up in the capital, including in and around the special trial court, to fend off any untoward incident over the verdict.

Besides, the movement of pedestrians on and around the road was restricted.

Earlier on September 18, the tribunal fixed October 10 to pronounce its verdict in two cases– one for murder and the other for grenade blast– after both the prosecution and the defence completed their arguments.

Closing their arguments, the prosecution sought the highest punishment to all the accused, including Tarique, saying they were able to prove all the charges beyond reasonable doubt.

They also said Tarique masterminded the attack and helped militants in order to kill Sheikh Hasina by throwing the grenades to make Awami League leaderless.

But the defence lawyers sought acquittal of their clients as they said the prosecution failed to present substantial evidence to prove the charges.

They also claimed that Tarique, who has been staying in London since 2008, was implicated in the cases with a political motive.

On October 23 last, the prosecution started placing arguments before the tribunal in connection with the two cases filed over the August 21 grenade attack on an Awami League rally in the capital in 2004.

On August 21, 2004, the grisly grenade attack was carried out on an anti-terrorism rally arranged by Awami League at Bangabandhu Avenue during the BNP-Jamaat alliance’s rule, aiming to kill then opposition leader Sheikh Hasina.

At least 24 leaders and activists, including AL’s women affairs secretary and late President Zillur Rahman’s wife Ivy Rahman, were killed and 300 others injured in the grenade attack.

Although Sheikh Hasina fortunately escaped the attack unhurt, her hearing was affected badly.

At least 13 grenades were thrown from the rooftops of a nearby building soon after Sheikh Hasina had finished her speech at the rally.

Then the two cases — one under the Explosive Substances Act and another for murder — were filed in connection with the grenade attack.

Justice Jainul Abedin submitted his report after 40 days indicting that a powerful foreign intelligence agency had a hand in the incident. But Awami League turned down the probe report.

As the Criminal Investigation Department (CID) was later assigned to deal with the cases, they made a cooked-up story of Joj Mia and arrested him with 20 other people in connection with the incident in June 2005.

Joj Mia was reportedly forced to give a statement confessing to his involvement in the attack. Later, there had been no progress in the investigation during the BNP-Jamaat rule.

The investigation into the grenade attack took a new turn after the military-backed caretaker government took over following the 1/11 political changeover in 2007.

After recording the testimonies of 61 prosecution witnesses, a court on August 3, 2009 ordered further investigation into the cases following petitions filed by the prosecution after the Awami League came to power.

Now-retired police officer Abdul Kahar Akanda was given the charge for carrying out investigation into the cases.