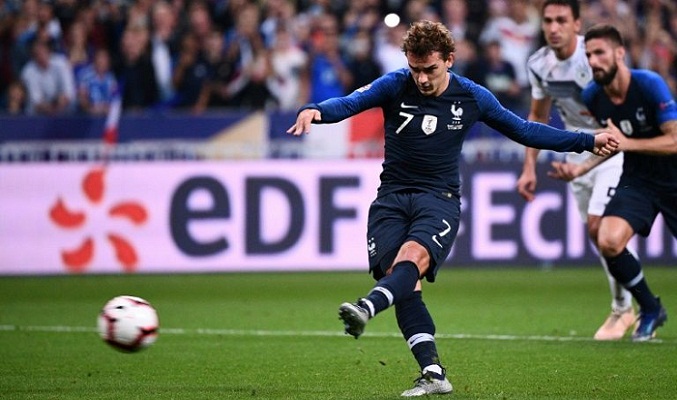 Antoine Griezmann hit a pair of second-half goals as world champions France came from behind to beat Germany 2-1 in the UEFA Nations League on Tuesday and cast further doubt on Joachim Loew’s future.

Toni Kroos struck a 14th-minute penalty for Germany, but Griezmann engineered a rousing fightback in the first game between the nations at the Stade de France since the November 2015 friendly that was overshadowed by a series of terror attacks on the French capital.

France coach Didier Deschamps fielded an almost identical team to the one that started the World Cup final, Presnel Kimpembe the lone exception in place of the injured Samuel Umtiti.

Germany’s chastening 3-0 defeat by the Dutch on Saturday prompted Loew to make five changes, as he injected additional pace into the attack with the inclusions of Leroy Sane and Serge Gnabry.

Kylian Mbappe’s electrifying speed was soon on display, but Hugo Lloris initially proved the far busier of the two goalkeepers as Germany sought to end a run of three competitive matches without a goal.

Lloris, who missed last month’s opening 0-0 draw in Munich, was forced to hack clear early on when N’Golo Kante’s intervention sent the ball rolling towards his own goal.

However, he was beaten on 14 minutes when Kroos struck from the spot after Paris Saint-Germain centre-back Kimpembe was penalised for a handball as he slid to block a Sane cross.

Lloris guessed correctly and dived to his left although the Tottenham keeper could only help the ball into the corner of the net.

Germany immediately threatened a second as Sane burst clear on the halfway line, but his pass for Timo Werner was pushed away from the RB Leipzig striker by an outstretched Lloris.

France, unbeaten in 14 matches since a friendly loss to Colombia in March, were again indebted to Lloris when he scrambled a Matthias Ginter effort behind after a chance fell invintingly to the defender at a corner.

Olivier Giroud lifted over a difficult chance from a Lucas Hernandez cross just before half-time, shortly after a teasing Griezmann delivery eluded a lunging Mbappe in the Germany box.

A vastly improved France nearly equalised through Mbappe minutes into the second half, the teenager denied by Manuel Neuer’s left boot as he bore in on goal.

Sane scuffed wide from a Nico Schulz cut-back, but France levelled on 62 minutes as Griezmann rose magnificently to head a driven Lucas Hernandez cross beyond a helpless Neuer.

But France were awarded a penalty of their own 10 minutes from time when Paul Pogba slipped in Blaise Matuidi, the Juventus midfielder upended by Mats Hummels as he tried to round Neuer.

Griezmann smacked the resulting spot-kick past Neuer to condemn Germany to an alarming sixth defeat in their last 10 outings, and rule Loew’s side out of Nations League title contention.

France, who top the section on seven points, take on the Netherlands in their final game on November 16 in Rotterdam, while Germany must beat the Dutch in Gelsenkirchen next month if they are to avoid relegation.