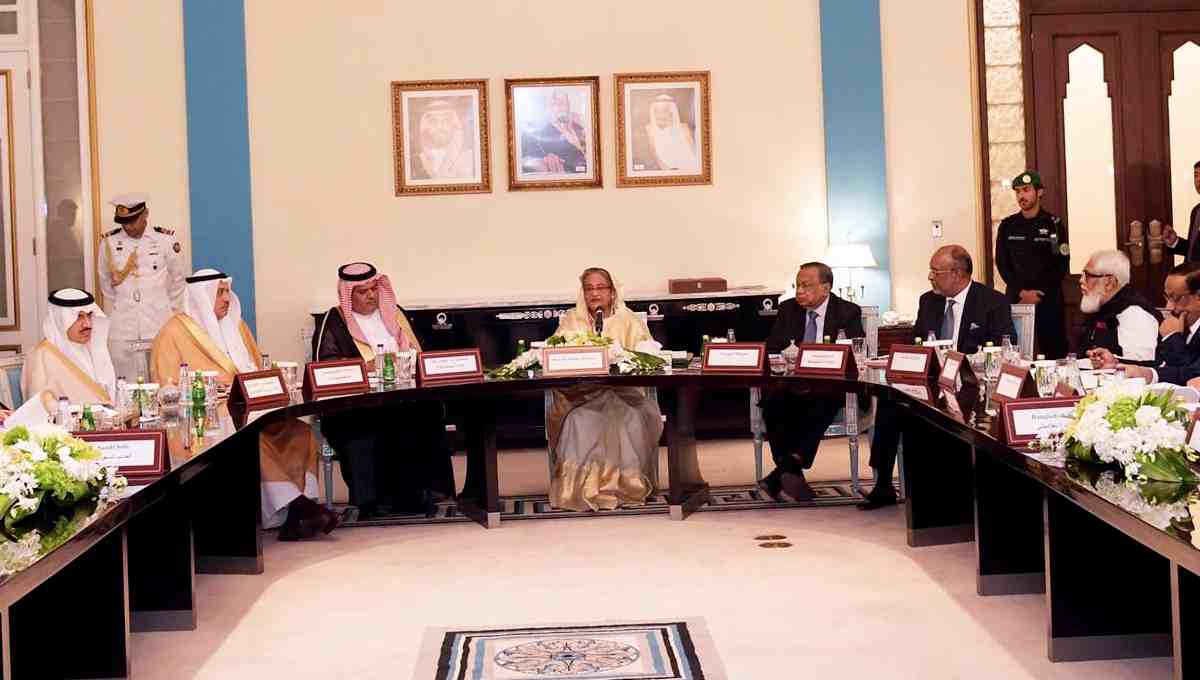 Riyadh, Oct 17 : Prime Minister Sheikh Hasina on Wednesday invited Saudi entrepreneurs to invest in Bangladesh for mutual benefits as both the countries lag behind in exploiting their full potentials of trade and investment opportunities.

“We can join hands in our journey of shared profit and prosperity. I assure you of my government’s full support and cooperation,” she said.

The Prime Minister said this while holding a meeting with the Saudi business community, including leaders of the Council of Saudi Chamber and Riyadh Chamber of Commerce, at King Saud Palace.

Sheikh Hasina said Bangladesh is implementing 10 growth and employment-generating mega projects as it is ready to take up more projects in diversified areas of infrastructure, connectivity and high-tech, tourism, health and education for a sustainable double-digit growth.

She mentioned that Bangladesh has earmarked 2,000 acres of land in one of the Exclusive Economic Zones for Saudi Arabian investors, which can be developed and operated as per their own requirement.

Hasina said the advantages of Bangladesh for the foreign investors, including Saudis’, are young, committed and an easily trainable workforce with highly competitive wages, cheaper cost of setting us businesses, access to large duty-, quota-free markets that includes the EU, Australia, Canada, India, Japan and New Zealand.

“It also has low-cost electricity and water, good credit rating, minimum risk factors, and fast technology adaptability. All these facilities combined together, Bangladesh gives the maximum return and dividend to investors,” she said.

The Prime Minister mentioned that Bangladesh has the most liberal investment policy in South Asia with most attractive incentives returning highest profit rate. It includes the protection of FDI by law, incentives like generous tax holiday, concessionary duty on import of machinery, duty-free import of raw materials, remittances on royalty, 100 percent foreign equity, unrestricted exit policy, and full repatriation of dividend and capital on exit.

Hasina said Bangladesh wants to connect and transform those by introducing smart, next-generation logistic networks so that these Zones become part of dynamic global supply chains. Two dozens of high-tech parks are also there in place.

The Prime Minister said Bangladesh and Saudi Arabia have been enjoying excellent bilateral relation which is based on common faith, culture, values and aspirations.

“Trade relations between Bangladesh and Saudi Arabia date back to the seventh century when Arab traders first set foot in the port city of Chittagong. Both countries have reached an increasing level of bilateral trade in recent years crossing the USD 1 billion mark in 2017-18 fiscal year. But, we’re far behind in exploiting full potentials of trade and investment opportunities,” she added.

Hasina mentioned that Saudi investment in Bangladesh now stands at USD 5 billion in 25 projects and it is primarily focused on the areas of agro-based industry, food and processed food, textiles and garments, leather, petro-chemical, engineering and service sector products.

She said Bangladesh is now the 32nd largest economy in the world in terms of purchasing power parity. Poverty rate has fallen to 21.8 percent in 2018 from 41.5 percent in 2006.

In March 2018, she said, the UN declared Bangladesh eligible for graduation from LDC group to a developing country.

Last year, Hasina said, Bangladesh’s economy was among the top-10 fastest-growing economies of the world. Despite the global economic turmoil, it maintained a sustained GDP growth over 7 percent during last 10 years reaching 7.86 percent this year.