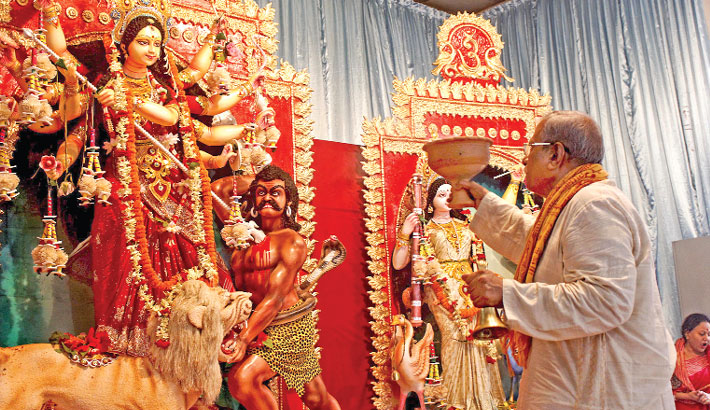 Dhaka, Oct 19 : The five-day Durga Puja, the greatest of all Hindu festivals, will come to an end today (Friday) with solemn immersion of the Goddess Durga in the capital and elsewhere in the country.

Devotees are thronging Puja mandaps to celebrate BijoyaDashami, the last day of the festival and reciting the mantras and offering flowers to the goddess Durga (pushpanjali) and praying for her blessings.

Each of the mandaps across the country has been ornamented with beautiful idols, showcasing the goddess in all her glory.

BijoyaDashami is the special ceremony of reaffirming peace and good relations among people.

On this day, families visit each other to share sweetmeats. Married Hindu women put vermilion on each other’s forehead on the occasion.

This year, the religious festival is being celebrated at some 31,000 puja mandaps throughout the country, including the capital.

In the capital, thousands of people are set to throng the Buriganga today to observe the final phase of the festival — the immersion of the goddess Durga.

Devotees in their tearful eyes will bid farewell to the mother deity and her children – Lakshmi, Saraswati, Kartik and Ganesh – through the immersion of their idols in the water wishing Durga’s return next year.

Meanwhile, there will be strict security measures in place so that Durga Puja ends peacefully.

The five-day festival started on October 15 with the incarnation (Bodhon) of the Goddess Durga marking Sashthi.

It symbolises the battle between good and evil where the dark forces eventually succumb to the divine.