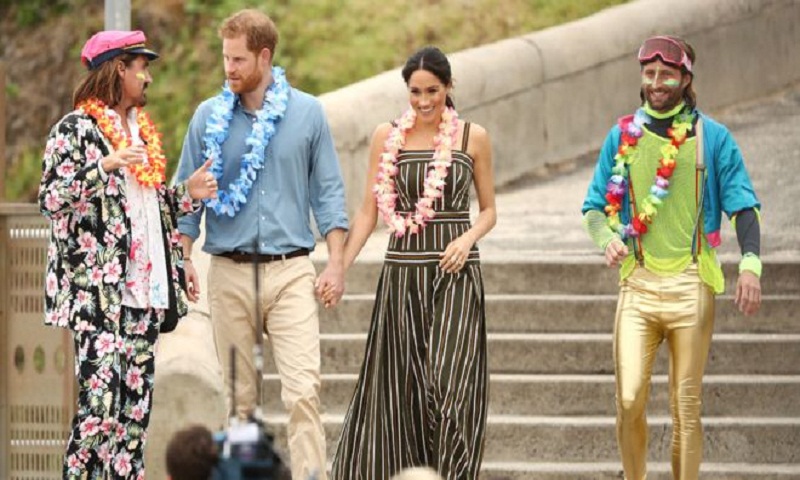 It may be a grey day in Sydney but hundreds of people have brought colour to Bondi Beach to meet the Duke and Duchess of Sussex.
Harry and Meghan are meeting members of One Wave, a surfing community group, as they take part in “Fluro Friday”.

It means there is a lot of neon and colourful garlands being worn at the session, which encourages the discussion of mental health issues.

The royals kicked off their shoes to walk on the sand at the beach.

The couple were greeted by cheers and screams as they arrived at Bondi, the latest stop on their Australian tour, just before 08:30 local time on Friday morning.

They were met by Grant Trebilco and Sam Schumacher, founder and co-founder of OneWave – one in a floral suit, and the other in gold trousers and rainbow-coloured braces.

Harry got into the spirit of the occasion by slipping a blue lei around his neck, to match his shirt of the same colour, while his wife was given a pink one.

The duchess is wearing another outfit by an Australian designer, this time choosing a striped dress by Martin Grant.

Both went barefoot to walk on the beach, where they sat in a circle on the sand to speak to members of OneWave.

The duke is due to climb Sydney Harbour Bridge later. Harry will be accompanied on his bridge climb by competitors from the Invictus Games – the competition for armed forces veterans which he set up.

They will raise a flag for the games on top of the landmark.

Later, the couple will meet Prime Minister Scott Morrison and leader of the opposition Bill Shorten.