Bells of French cathedrals ring in tribute to Notre Dame 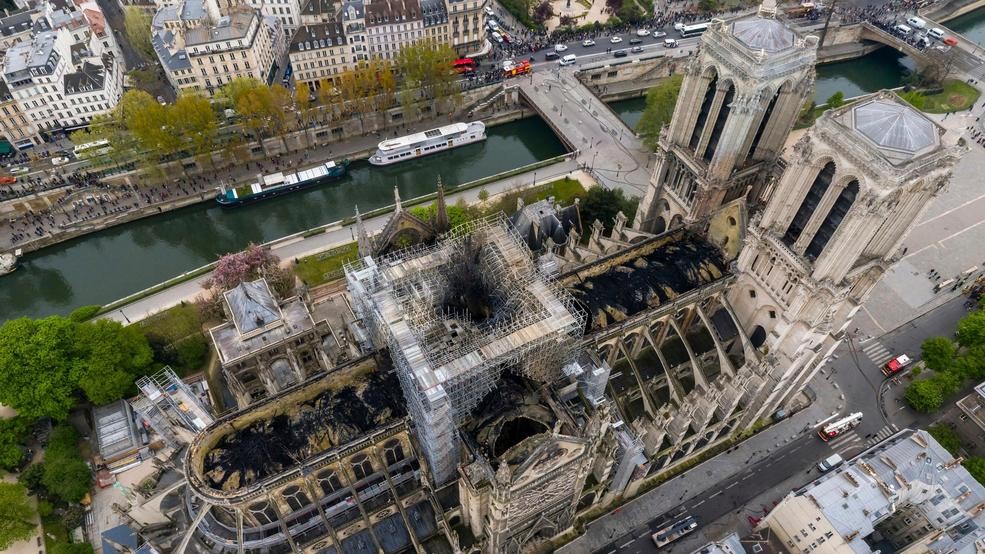 Photo: An image made available by Gigarama.ru on Wednesday April 17, 2019 shows an aerial shot of the fire damage to Notre Dame cathedral in Paris on Tuesday April 16.


Paris, Apr 18 : Bells of cathedrals across France rang in a moving tribute Wednesday to Notre Dame as firefighters and experts continued to keep the beloved but weakened landmark under close surveillance.

From Sacre Coeur in Paris to the cities of Strasbourg in the east and Rouen in the west, the architectural treasures of France solemnly marked the inferno, two days after it ravaged the gothic cathedral, widely regarded as the soul of France.

“I just arrived for the first ring of the bells and immediately there was an emotion. Incredible, indescribable, I just can’t explain it,” said Nadia Pascassio-Comte, in Strasbourg. “It was beautiful and sad at the same time. I had tears in my eyes at one point, and I think that this solidarity is magical, it really unites a lot of people.”

At Saint Sulpice church, the second-largest house of worship in Paris, French first lady Brigitte Macron attended a special service for the annual blessing of the oils during Holy Week, ahead of Easter Sunday.

Even Prime Minister Edouard Philippe acknowledged Wednesday that it would be difficult.

“This is obviously an immense challenge, a historic responsibility,” Philippe said after a Cabinet meeting focused on the restoration.

Pericolo, who worked on the restoration of the 19th-century St.-Donatien Basilica, which was badly damaged in a 2015 blaze in the French city of Nantes, said it could take two to five years just to check the stability of Notre Dame, which dominates the Paris skyline.

“It’s a fundamental step, and very complex, because it’s difficult to send workers into a monument whose vaulted ceilings are swollen with water,” Pericolo told France-Info. “The end of the fire doesn’t mean the edifice is totally saved. The stone can deteriorate when it is exposed to high temperatures and change its mineral composition and fracture inside.”

Macron received some support for his lofty five-year restoration goal from his presidential cultural heritage envoy, Stephane Bern, who said it was realistic to reopen Notre Dame to the public in time for the Olympic Games in Paris in 2024. However, he did not indicate whether the reconstruction work would be completed by then.

Speaking after a meeting at the presidential palace about the monument’s reconstruction, Bern said Macron didn’t express his views regarding the rebuilding of the cathedral’s lead roof, or whether the frame should be restored in wood like the destroyed one, or in metal or concrete. He also said France would hold an international architecture competition to determine whether the collapsed 19th-century spire would be rebuilt to the same design or a new one.

Meanwhile, Notre Dame’s rector said he would close the cathedral for up to “five to six years,” acknowledging that a segment of the structure may be gravely weakened.

According to a French government official, the building would have burned to the ground in a “chain-reaction collapse” had firefighters not moved as rapidly as they did to battle the blaze racing through the building.

“If the fire reached this wooden structure, the bell tower would have been lost,” de Matos said at a news conference. “From the moment we lose the war of the bell towers, we lose the cathedral, because it’s a chain-reaction collapse.”

An initial fire alert was sounded at 6:20 p.m., as a Mass was underway in the cathedral, but no fire was found. A second alarm went off at 6:43 p.m., and the blaze was discovered on the roof. No one was killed in the fire, after firefighters and church officials speedily evacuated those inside.

Firefighters acted as fast as they could to save the cathedral, said senior fire official Philippe Demay, denying that there was any delay in their response.

Despite extensive damage, many of the cathedral’s treasures were saved, including Notre Dame’s famous rose windows, although they are not out of danger.

Jean-Marc Fournier, chaplain of the Paris fire brigade, told Catholic broadcaster KTO that the trickiest part was reaching the person who held the security codes to open the safe containing the Crown of Thorns, regarded as Notre Dame’s most sacred relic.

Paris Firefighters’ spokesman Lt.-Col. Gabriel Plus said that even though they are in good condition, a “threat” continues to the gables, or support walls, because of the heavy stone statues perched on top of them.

“The roof no longer holds (the gables) up. They are holding up all by themselves,” he said, adding that some statues must be removed to lessen the weight on the gables.

Scaffolding that had been erected for a renovation of the spire and roof must also be properly removed because of its weight and because it is now “crucially deformed,” he added.

The Paris prosecutor’s office said investigators have been able to access some parts of the building, although others remain too dangerous. No indication of a criminal act had been found so far, it said.

More than 40 people have already been questioned in the investigation, including workers at the five construction companies who were involved in renovating the church spire and roof. Police also took images of the destruction using drones, in case it is altered by wind or rain.

Nearly $1 billion has been pledged for the cathedral’s restoration, coming from ordinary worshippers and wealthy magnates, including those who own L’Oreal, Chanel and Dior. Bern told broadcaster France-Info that 880 million euros ($995 million) has been raised since the fire.

Criticism already has surfaced in France from those who say the money could be better spent elsewhere, on smaller, struggling churches or on workers. Others have criticized the billionaires’ donations because their pledges make them eligible for huge deductions in taxes.

2019-04-18
Mr. Admin
Previous: Awareness campaign about disaster urgently needed: PM
Next: 5 to die in C’nawabganj for killing girl after rape