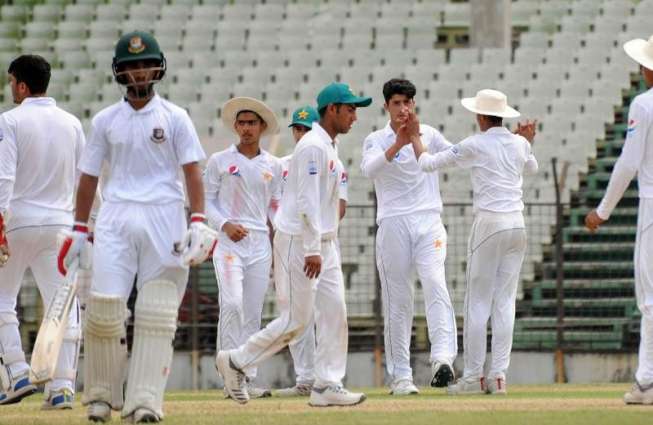 Bangladesh Under-16 clinched the two-match three-day series against Pakistan after the second and final game ended in a draw at the Sheikh Abu Naser Stadium in Khulna on Wednesday.
Bangladesh won the first match by five wickets and thereby took the series 1-0.

Chasing the target of 256 on the third and final day, the Pakistan Under-16 team was 103-3 in 25over after which the two captains agreed for draw.Earlier resuming the day on 29-2, Bangladesh Under-16 team declared their second innings on 183-8, stretching the overall lead to 255.

Aich Mollah led the way with a superb 109 ball-87 runs knock,that was studded with nine fours and four sixes. He was ably supported by Sakib Shahriar’s 32 and Rafsan Zani’s 28.

Apart from the three, the rest of the batsmen failed to reach double digit figure.

Sameer Saqib (35) and Muhammad Shehzad (26) started well for Pakistan in pursuit of 256, adding 57 for the opening stand. Bangladesh pacer Mahfuzur Rahman Rabbi removed both of the openers to peg back Pakistan’s innings.

Sohag Ali then dismissed Kasif Ali to leave Pakistan 89-3, which forced them not to go for ultimate kill and finally agreed for draw.Muhammad Waqas and Umer Eman were batting on 28 and 7 runs respectively by the time when game ended.

Thanks to captain Rihad’s 136 not out, Bangladesh piled up 292 in its first innings, before dismissing Pakistan for 220 to earn 72 runs first innings lead. Rihad was adjudged man of the match for his century.

Ravi Shastri to step down after T20 World Cup