Trump arrives in Tokyo for state visit, golf and sumo 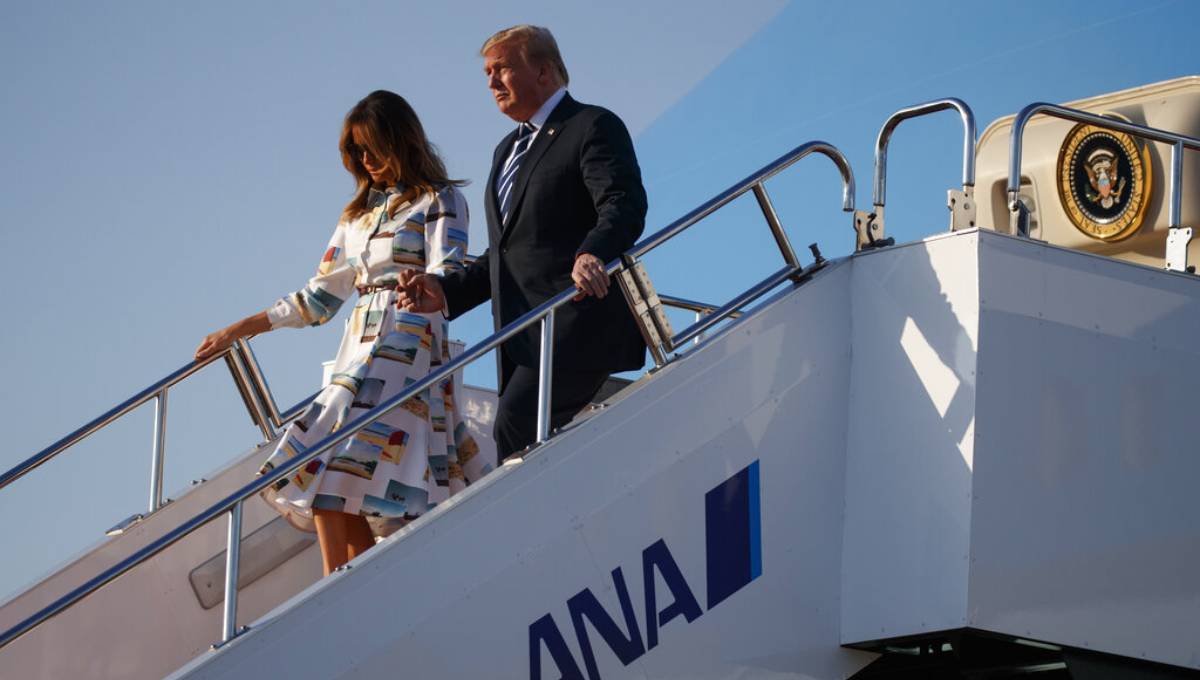 Tokyo, May 25 : Under the threat of potentially devastating U.S. tariffs on autos, Japan was ready to roll out the newest phase of its charm offensive targeting President Donald Trump as it welcomed him on a state visit tailor-made to his whims and ego.

Offering high honors, golf and the chance to present a “Trump Cup” at a sumo wrestling championship, Japanese Prime Minister Shinzo Abe, arguably Trump’s closest friend on the world stage, will continue a years-long campaign that so far appears to have spared Japan from far more debilitating U.S. actions.

The stakes are high. U.S. tariffs could cripple Japan’s auto industry, while North Korea remains a destabilizing threat in the region. But this trip, the first of two Trump is expected to make to Japan in the next six weeks, is more of a social call meant to highlight the alliance between the countries and the friendship between their leaders.

“In the world of Donald Trump, terrible things can happen if you’re an ally, but no major blows have landed on Japan,” said Michael Green, senior vice president for Asia and Japan chair at the Center for Strategic and International Studies.

Trump and first lady Melania Trump arrived just before 5 p.m. local time Saturday aboard Air Force One after a 14-hour journey. The president’s first stop will be a dinner with business leaders at the U.S. Ambassador’s residence in Tokyo after a brief airport welcome.

Trump has the honor of being the first head of state invited to meet Emperor Naruhito since he assumed power May 1 after his father stepped down, the first abdication in about two centuries. Naruhito will welcome Trump to the Imperial Palace on Monday for a meeting and banquet in his honor.

“With all the countries of the world, I’m the guest of honor at the biggest event that they’ve had in over 200 years,” Trump said Thursday.

Trump arrived shortly after a relatively strong earthquake rattled Tokyo. Japan’s Meteorological Agency said the quake, registering magnitude 5.1, struck in Chiba, just south of Tokyo, at 3:20 p.m., about 40 kilometers (24 miles) underground. Trump was to arrive two hours later. The agency said there was no danger of a tsunami from the inland quake.

Abe will host Trump on Sunday for a round of golf and take the president to a sumo wrestling match, a sport Trump said he finds “fascinating.” Trump is eager to present the winner with a U.S.-made trophy.

It’s all part of a kindness campaign aimed at encouraging Trump to alleviate trade pressures, said Riley Walters, a policy analyst at the Heritage Foundation’s Asian Studies Center, who said the personal relationship between Trump and Abe is probably the best of any two world leaders.

Abe made a strategic decision before Trump was elected to focus on Japan’s relationship with the U.S. The courtship began when Abe rushed to New York two weeks after the November 2016 election to meet the president-elect at Trump Tower. Last month, Abe and his wife, Akie, celebrated Melania Trump’s birthday over a couples’ dinner at the White House.

Trump plans to return to Japan for a summit of leading rich and developing nations in Osaka in late June.

Behind the smiles and personal friendship, however, lurks deep uneasiness over Trump’s threat to impose tariffs on Japanese autos and auto parts on national security grounds, a move that would be far more devastating to the Japanese economy than earlier tariffs on steel and aluminum.

“On the surface, it’s all going to be a display of warmth, friendship, hospitality,” said Mireya Solis, a senior fellow at the Brookings Center for East Asia Policy Studies. But, she said, “there’s an undercurrent of awkwardness and concern about what the future might hold. … We’re coming to a decisive moment. This is, I think, the moment of truth.”

Also at issue is the lingering threat of North Korea, which has resumed missile testing and recently fired a series of short-range projectiles that U.S. officials, including Trump, have tried to downplay despite an agreement by North Korea to hold off on further testing.

“The moratorium was focused, very focused, on intercontinental missile systems, the ones that threaten the United States,” Secretary of State Mike Pompeo said in a recent television interview. That raised alarm bells in Japan, where short-range missiles pose a serious threat.

“That is not an acceptable American position for Japan,” said Green.

Speaking to reporters Saturday ahead of Trump’s arrival, national security adviser John Bolton called the series of short-range missile tests a violation of U.N. Security Council resolutions and said sanctions must be kept in place.

Japan, which relies on the U.S. for its defense, has also been largely cut out of negotiations with North Korea, even as Kim Jong Un has met with other leaders in the region, including China’s Xi Jinping. That leaves Abe to rely on the U.S. as an intermediary, said Sheila Smith, an expert on Japanese politics and foreign policy at the Council on Foreign Relations.

“Abe has to rely on Trump to advocate,” she said. Abe recently offered to meet Kim without preconditions in an effort to restore diplomatic ties.

With Trump’s relations with the leaders of the U.K., Germany, Canada and other allies strained, Abe has worked more than any other leader to try to keep Trump engaged with international institutions, Green said, adding that it is critical for Japan’s survival.

And while leaders across Europe and elsewhere might take heat for cozying up to Trump, analysts say Japanese voters see Trump more as a curiosity and understand the pragmatic importance of good relations, which they say has paid off for Abe.

Indeed, while Trump has rejected Abe’s invitations to re-join a sweeping trans-Pacific trade deal and keeps the threat of tariffs in place, Trump walked away from his last meeting with Kim without a deal, which some had feared would include a declaration to end the Korean war and a vow to pull U.S. troops from the peninsula.

“I would argue that Abe has been so good at maintaining the relationship that maybe things could be worse,” Walters said.