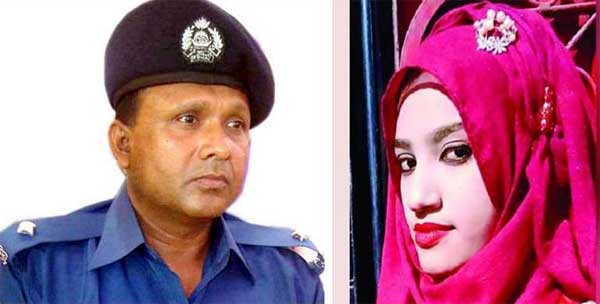 All allegations against Moazzem Hossain, former officer-in-charge (OC) of Sonagazi Model Police Station, in spreading a recorded statement of Feni madrasa student Nusrat Jahan Rafi on social media have been proved in the investigation by Police Bureau of Investigation (PBI).
Senior Assistant Superintendent of Police (ASP) Rima Sultan of PBI headquarters submitted the investigation report of a case related to Nusrat murder before Dhaka Cyber Tribunal on Sunday.

Confirming the submission, Rima Sultan said, “All the allegations of spreading a recorded statement of Nusrat by OC Moazzem on social media were found correct in our investigation.”On April 15, Supreme Court lawyer Barrister Sayedul Haque Sumon filed a case petition against Moazzem under Sections 26, 29 and 31 of the Digital Security Act.

During an interrogation, Moazzem asked Nusrat offensive and unpleasant questions over the incident. Later, he spread the video on social media.

On April 6, Nusrat was set afire at an examination centre allegedly by people loyal to the principal of her madrasa after he was arrested and subsequently suspended as she had accused him of sexually harassing her in Sonagaziupazila of Feni district.

She lost her battle for life on April 10 at Dhaka Medical College Hospital in the capital.