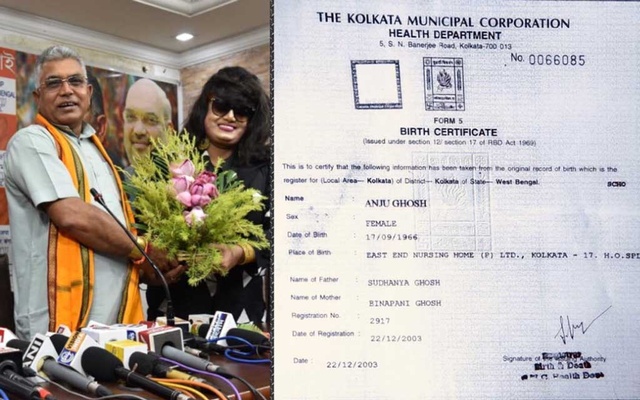 The Bharatiya Janata Party (BJP) on Thursday produced documentary evidence of Bengali actor Anju Ghosh’s Indian citizenship a day after her induction into the party prompted speculation about her nationality since she has acted in Bangladeshi films.
Bangladeshi film actress Anju Ghosh has joined Indian Prime Minister Narendra Modi’s Bharatiya Janata Party, or BJP, in West Bengal on June 5.

“Smt. Anju Ghosh has recently joined our BJP. It has created some ripples and questions about her citizenship status. She is an Indian citizen and to rest all doubts, her ‘Birth Certificate’ is the proof of her nationality,” BJP’s West Bengal unit chief, Dilip Ghosh, said in a tweet. He also tweeted the certificate.BJP’s state vice president, Jay Prakash Majumdar, produced copies of Anju Ghosh’s birth certificate, Indian passport, Aadhar card, PAN and voter card as proof of her Indian citizenship.

“Anju Ghosh was born in Kolkata, has a Kolkata Corporation birth certificate, Aadhaar card, and Indian passport,” he said as he released the documents.

Majumdar said Ghosh’s father was born in what is now Bangladesh and her mother in West Bengal. “After Bangladesh’s creation in 1971, her mother stayed back in Kolkata while her father became a Bangladeshi citizen,” said Majumdar. “Anju Ghosh lived in Bangladesh to act in movies. She is very much an Indian citizen.”

Anju Ghosh did not respond to queries about her citizenship at the BJP state headquarters in Kolkata on Wednesday and prompted the speculation about her nationality. “India is everything to me. My husband is an Indian and my father died here,” she responded when asked about her nationality as she joined the BJP.

In a tweet, the Congress’s Assam unit said, “A popular Bangladeshi actress on Wednesday formally joined the BJP in presence of d party’s state president Dilip Ghosh in Kol. Actor Anju Ghosh, when asked about her current citizenship status, didn’t reply. So is the #BJP going 2form govt in Bangdsh too?”