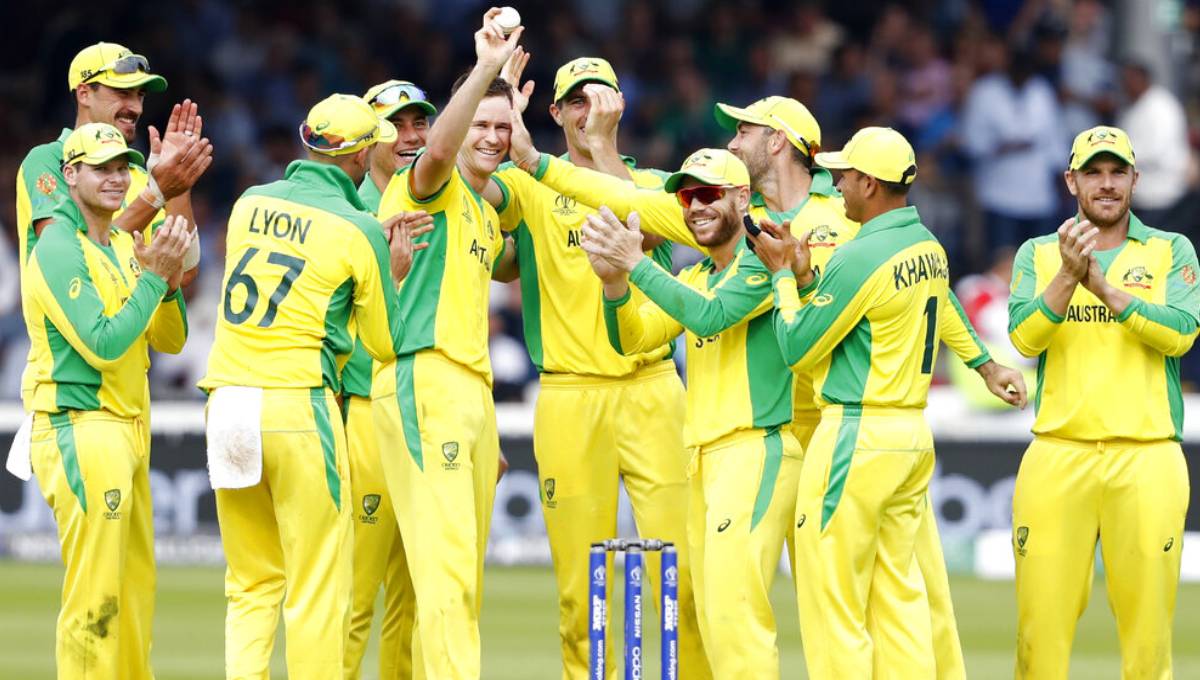 Photo : Australia’s Jason Behrendorff, centre, holds up the ball as he celebrates with teammates after taking the wicket of England’s Jofra Archer during the Cricket World Cup match between England and Australia at Lord’s cricket ground in London, Tuesday, June 25, 2019.

London, June 25 : Australia smothered top-ranked England by 64 runs at Lord’s on Tuesday and ratcheted up the pressure on the home side to join the defending champion in the Cricket World Cup semifinals.

First into the playoffs, the Australians successfully defended a total for the fourth consecutive match, making 285-7 stand tall by bowling out England for 221 with 5.2 overs to spare. Fast bowler Jason Behrendorff claimed a maiden 5-for while Mitchell Starc grabbed four to lead the tournament wickets list with 19.

England rose to the top of the one-day rankings thanks to fearless and imaginative chases, but fell to a third defeat in seven matches in its home World Cup, all three while chasing.

Consecutive losses at home for the first time since 2015 — also inflicted by Australia at Lord’s — aren’t fatal to England’s semifinal hopes, but raised the stakes even higher for a win against India or New Zealand, who are both unbeaten.

This latest defeat for England also breathed more life into closest challengers Bangladesh, Sri Lanka, and Pakistan, each of which must still win all their remaining games to remain hopeful.

The decision at the toss was vital. Eoin Morgan won it and made Australia bat first. Counterpart captain Aaron Finch was leaning toward bowling first, too, but wasn’t fussed.

All three found movement off the seam in a rousing opening but the edges, air shots, and drops near fielders faded away as Finch and David Warner came out of their bunker and posted their third century stand of the tournament.

Finch and Warner have been out only once each in the first 10 overs, and still only once through seven matches. Finch was pulling too-short balls to the boundary and Warner, given three slips, soon scattered them as he hit boundaries off Archer, Woakes, and Wood.

Finch reached his fifty in the 19th and Warner his in the 20th.

They were serene until on 123 in the 23rd over Warner was taken aback by Moeen Ali and mistimed to backward point, where Joe Root juggled the catch. Warner made 53 off 61 balls.

Finch reached his 15th one-day international hundred, seventh against England, and second in this World Cup only to depart on the next ball. He hit 11 boundaries and two sixes and left his side sitting pretty at 185-3 in the 36th over.

But the charge didn’t come. England fought back to take 5-74 — Smith was booed walking in and walking out on 38 — and Australia finished feeling short-changed.

Finch pulled out another ace card, however. He gave the new ball to Behrendorff, who was hammered by Sri Lanka in his only World Cup appearance but was picked for the conditions at Lord’s and was brilliant.

He bowled James Vince on the second ball of the innings with an inswinger, and by the time Jonny Bairstow game him his second wicket, England was 53-4 and its low confidence was hurt again.

Starc had removed Joe Root on 8 and Morgan on 4.

England was still in the semifinal positions, but Australia rose to No. 1, with new tennis No. 1 Ash Barty watching from the packed stands.