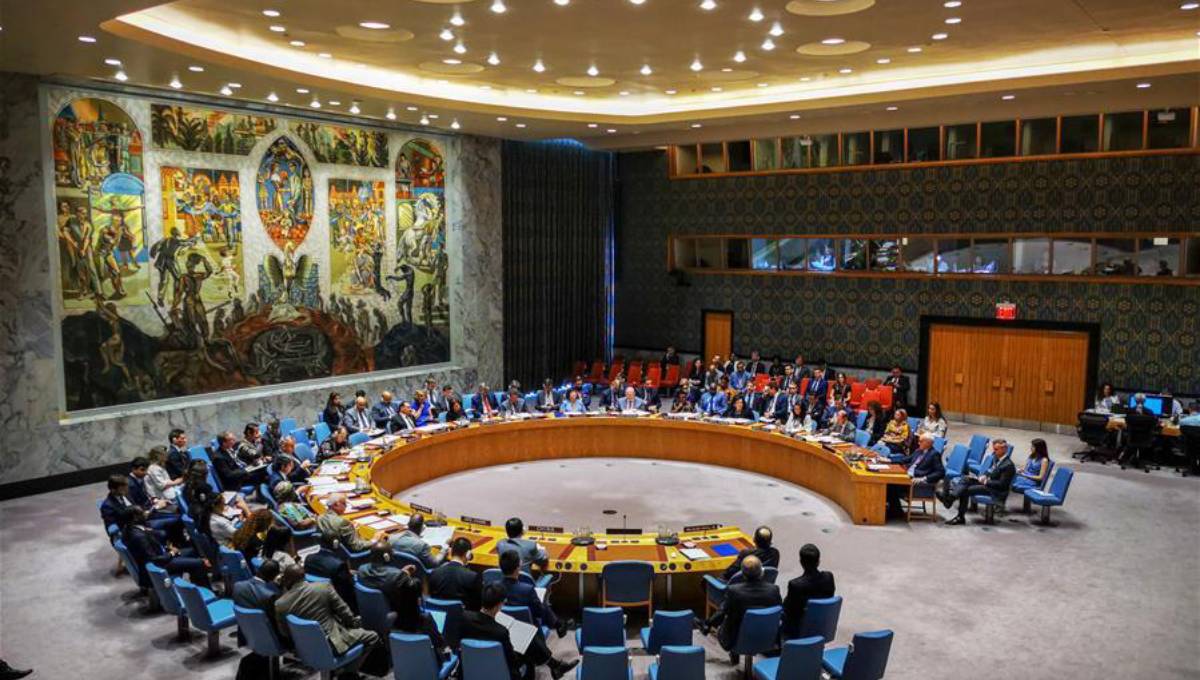 Photo taken on June 26, 2019 shows the United Nations Security Council’s semi-annual briefing on the implementation of Resolution 2231, which endorsed the Joint Comprehensive Plan of Action (JCPOA) on Iran’s nuclear program, at the UN headquarters in New York. Joao Vale de Almeida, head of the EU delegation to the United Nations, on Wednesday reiterated support for the Joint Comprehensive Plan of Action, commonly known as the Iran nuclear deal, despite mounting tensions between the United States and the Islamic republic.

United Nations, June 27 : The European Union (EU) on Wednesday firmly supported the Joint Comprehensive Plan of Action (JCPOA), commonly known at the Iran nuclear deal, regretted over U.S. withdrawal from the deal and asked Iran to implement the agreement.

The current and future EU members of the United Nations Security Council (UNSC) expressed a unified position on the JCPOA, noting that in the current context, “it is more important than ever” to preserve the deal and Resolution 2231, which endorsed the JCPOA on Iran’s nuclear program. The Security Council held its semi-annual briefing on the implementation of Resolution 2231 on Wednesday.

“We, as the current and future European Union members of the Council, underline that in the current context, it is more important than ever to preserve the JCPOA and Resolution 2231,” according to a joint statement of the six current and future EU members of the UNSC (Britain, France, Germany, Belgium, Poland and Estonia) after the conclusion of the semi-annual briefing on the implementation of Resolution 2231.

“The JCPOA is widely regarded as fundamental to regional and international peace and security, a major achievement in nuclear non-proliferation and of diplomacy. Fulfillment of all nuclear-related commitments under the NPT (Treaty on the Non-Proliferation of Nuclear Weapons) as well as the JCPOA remains fundamental to guarantee the peaceful nature of Iranian nuclear program,” said the statement read out to reporters by Polish UN ambassador Joanna Wronecka.

The statement said that as set out in the seventh report of the UN secretary-general, it is essential that these diplomatic efforts and hard-won achievements “be preserved and built upon.”

“In this regard, we regret that the United States of America, further to its withdrawal from the Plan on May 8, 2018, has re-imposed sanctions and further decided not to extend waivers with regard to the trade in oil with the Islamic Republic of Iran, and not to fully renew waivers for nuclear non-proliferation projects in the framework of the Plan. These actions are contrary to the goals set out in the Plan and Resolution 2231,” according to the statement.

The statement stipulated that the EU has been clear that its support for the JCPOA relies on “full implementation” of the agreement by Iran.

“We welcome the work of the IAEA (International Atomic Energy Agency) to confirm Iranian implementation of its commitments. However, we are extremely concerned about the Iranian announcements regarding its nuclear commitments. We strongly urge Iran to continue to implement its commitments under JCPOA in full and to refrain from escalatory steps. France, Germany and Britain, with support of the EU and other member states, are finalizing the operationalization of INSTEX, a special purpose vehicle to facilitate legitimate trade with Iran.”

“Separate from the nuclear issues, we are concerned about the findings of the secretary-general regarding Iran’s regional activities, in particular ballistic missile related activities and transfers, which are inconsistent with Resolution 2231. We strongly urge Iran to refrain from such activities, which deepen mistrust and increase regional tensions,” said the statement.

Joao Vale de Almeida, head of the EU delegation to the UN earlier on the day reiterated EU’s support for the JCPOA.

“At this particular challenging moment, it is important to remind ourselves of the achievements of the Joint Comprehensive Plan of Action,” he said.

“It rolled back Iran’s nuclear program, blocked access to plutonium and high-enriched uranium and established the most robust verification mechanism by the IAEA,” he said, noting that the JCPOA is a key element of the global nuclear non-proliferation architecture and was endorsed unanimously by Resolution 2231.

On May 8, Iran issued a 60-day ultimatum to the remaining parties to the JCPOA (China, France, Germany, Russia, Britain, and the EU) to provide Iran with sanctions relief on its oil and financial sectors, failing which it would resume uranium enrichment activities and construction of the Arak nuclear reactor, which would constitute a direct violation of the JCPOA.