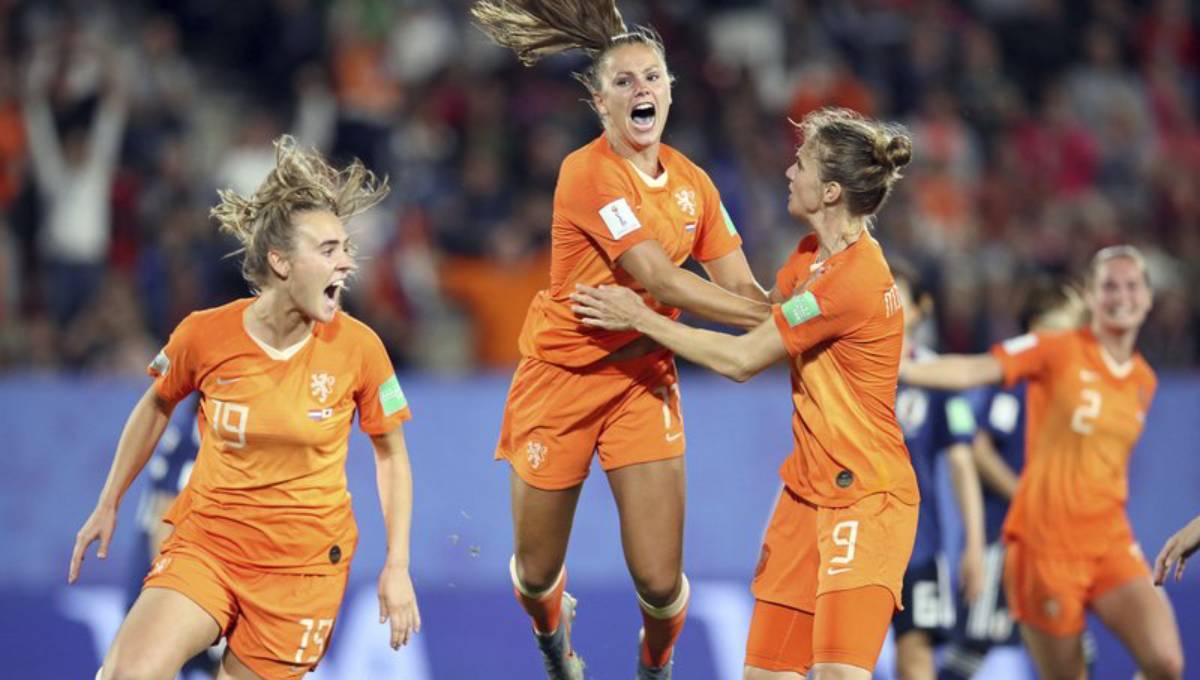 Photo: Netherlands’ Lieke Martens, center, celebrates after scoring her side’s second goal from the penalty spot during the Women’s World Cup round of 16 soccer match between the Netherlands and Japan at the Roazhon Park, in Rennes, France, Tuesday, June 25, 2019.

France, June 27 : Even Netherlands forward Lineth Beerensteyn had to check that the number was right.

Europe sure is dominating this Women’s World Cup.

The Netherlands made it a record seven European teams in the quarterfinals by knocking out Japan, which won the tournament in 2011 and reached the final four years ago.

Never before in the previous seven editions had an Asian team missed out on making the last eight. Only the United States’ victory over Spain prevented a clean sweep by European teams in the round of 16, and the defending champions now have to face host France on Friday.

“Sometimes it kind of feels like a Euros,” Netherlands forward Vivianne Miedema said. “America is amazing.”

The compliment isn’t being returned by U.S. forward Tobin Heath.

“As a football fan, to me I would want a little bit more diversity at this point,” Heath said. “I find European football is sometimes a little boring and I think that there’s some teams that are so exciting to watch, that you won’t be able to see this kind of different style, which is unfortunate at this stage because I appreciate certain teams that are no longer in the tournament.”

There is a freshness to the field, however.

The round opens with Norway playing England, which finished third in 2015, and wraps up Saturday night with two-time champion Germany taking on Sweden.

“The biggest example is Italy,” Miedema said. “They put a lot of money into Juventus and in a couple of other clubs. You see it directly on the World Cup.”

All but one of the Italian players plays at home, with eight out of 23 playing on the Serie A-winning Juventus squad.

But a few clubs have emerged as forces in the women’s game.

As many players on the Netherlands squad play for Ajax — four — as they do for newly crowned English champion Arsenal, including Miedema. While Arsenal was crowned European champion in 2007, Ajax has never conquered the continent.

The appearance of Norway in the World Cup quarterfinals signals a resurgence for the 1995 champions.

The Norwegians reached the semifinals in four of the first five editions of the Women’s World Cup, but were eliminated in the group stage in 2011 and in the round of 16 in 2015.

The majority of the squad still plays for Norwegian clubs, which struggle to make an impact in continental competitions and can’t afford the professional contracts enjoyed by the entire England traveling party.

“When there is money, other leagues can dominate,” Norway coach Martin Sjögren said through a translator. “In Scandinavian countries they were really early starting with women’s football — that means we have a history … but bigger nations started to invest. It had to produce results and maybe put women’s football even more on the map.”

“We have shown Scandinavian countries can even compete again,” Sjögren said.

On the world stage, maybe. It’s harder on the continent.

Swedish team Umeå was crowned European champions in 2003 and 2004 but the country hasn’t been represented in the final since Djurgården lost in 2005.

Since Arsenal’s triumph in 2007, German and French teams have had a lock on the European trophy. French club Lyon is the team to beat, winning four Champions League titles in a row.

“The investment and output and the value you get for money invested is high in women’s football,” said Nadine Kessler, the former world player of the year who is now head of women’s football at European governing body UEFA. “It can pay off much quicker than in the men’s game.”

England, Germany and France were the only European teams in the quarterfinals four years ago before the U.S. beat Japan in the final.

“There are already four World Cup winners from three different confederations,” said Kessler, a European champion with Germany in 2013. “The efforts over the past few years have allowed Europe to become generally better and more teams involved in the top level of the international game.”

While clubs are realizing the benefits of injecting cash into women’s operations, that can create disparities in Europe.

“Sweden has been a top league historically, but now we are seeing something changing and that’s the big men’s clubs coming in to invest,” said Sweden goalkeeper Hedvig Lindahl, who has just left Roman Abramovich-owned Chelsea. “Sweden has to be creative to invest in that top level.”

England goalkeeper Karen Bardsley, who grew up in California and now plays for Abu Dhabi-owned Manchester City, has seen the cash flowing into the European game make an impact at this World Cup.

“It’s been crying out for exactly what has happened,” Bardsley said in Le Havre, where England plays Norway. “Going back years it was dominated by a lot of North American teams and teams other than from Europe.

“It’s clear to see the investment in the likes of England, Spain, France, Germany … has paid off. They are attracting top talent like ours has in the Women’s Super League. That has been beneficial for the domestic players in those countries.”

“That has exposed the players to things that they have never been exposed to,” Bardsley said, “and it has kind of upped the bar in terms of performance standards.”

Standards teams outside Europe can reach if they apply for grants from international governing bodies, including FIFA, and implement a strategy like Kessler is doing at UEFA.

“You have to ask what’s the most relevant, what do you focus on — building foundations and raising the number of players?” Kessler said. “Or do you really want to focus on the elite end, coaching and player pathways. That’s very individual, very different and that’s the biggest question: where to start and with what priority.”