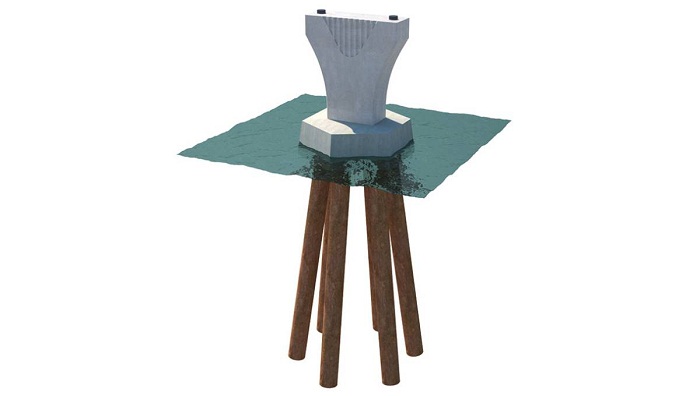 Dhaka, Jul 15  : Work on the last pile among 294 of the long-awaited Padma Bridge has been completed.
Engineers started the piling work on the number seven pile at 11:35am and finished it after eight hours at 8:20pm at the 26th No pier of the bridge.

A matter of great joy that the most challenging task is over on completion of this work,” said Executive Engineer (Main bridge ) Dewan Mohammad Abudul Quader.“It’s a real victory against the mighty Padma River and its rough nature,” he said.

Engineer Dewan said the last piling work on the bottom section was completed on Wednesday and the top section’s tube was put on Thursday. Later, incessant rains interrupted the welding work which took two more days. The pile driving started on Sunday after the Non-Destructive Testing (NDT) and it is done now, he added.

The 120-metre long and 3-metre width pile was made with China-made steel plate at Mawa Construction Yard.

The pile was driven into the the riverbed where 1.40 lakh cubic metres of water flows per second.

Earlier, engineers had faced complications due to soft ground soil at the Mawa point in Munshiganj. The work was then shifted to Jazira point in Shariatpur district.

“That was really a challenging job to finalise the design of the piers for that complications. But lastly the work is done,” engineer Dewan said.Padma Multiporpuse Bridge authorities said the construction of all the piers is expected to be completed within this year while the span installation work will continue.

An engineer told UNB that China Major Bridge Engineering Construction Company was given a deadline till July 31 for the piling work but they have completed the work two weeks ahead of the schedule.

Work on the country’s largest bridge started in December 2015. The structure started becoming visible with the installation of 150-metre span on pillars 37 and 38 on October 30, 2017.