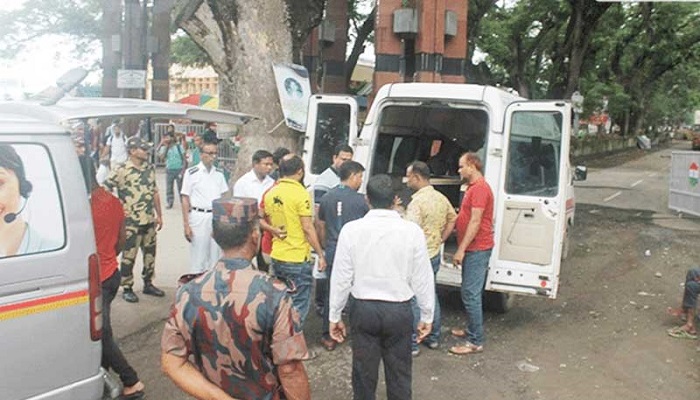 The bodies of Kazi Mohammad Moinul Alam and Farhana Islam Tania, who were killed in a Kolkata road crash yesterday, arrived home on Sunday.
An ambulance, carrying the bodies, entered into Bangladesh through Benapole immigration check post of Jashore at 9:00am this morning, Masum Billah, Immigration Inspector of the cheek post confirmed this.

He said, “The bodies of the victims have been handed over to their respective relatives after the formalities of immigration were completed this morning.”Abu Obaida Safin, cousin of deceased Tania, received her body and Ziad Ali, cousin of other victim, received the body of Moinul, the Inspector informed.

Earlier, Moinul and Tania were killed after a speedy Jaguar car rammed them in Kolkata on early Saturday.

The accident took place around 2:00am at the intersection of Loudon Street and Shakespeare Sarani in Kolkata during heavy rains while the duos along with some pedestrians were waiting at the nearby traffic point.

According to Kolkata police, the Jaguar car ran them over after colliding head-on with a Mercedes-Benz. Later, they rescued them and taken to hospital where duty doctor declared them dead.