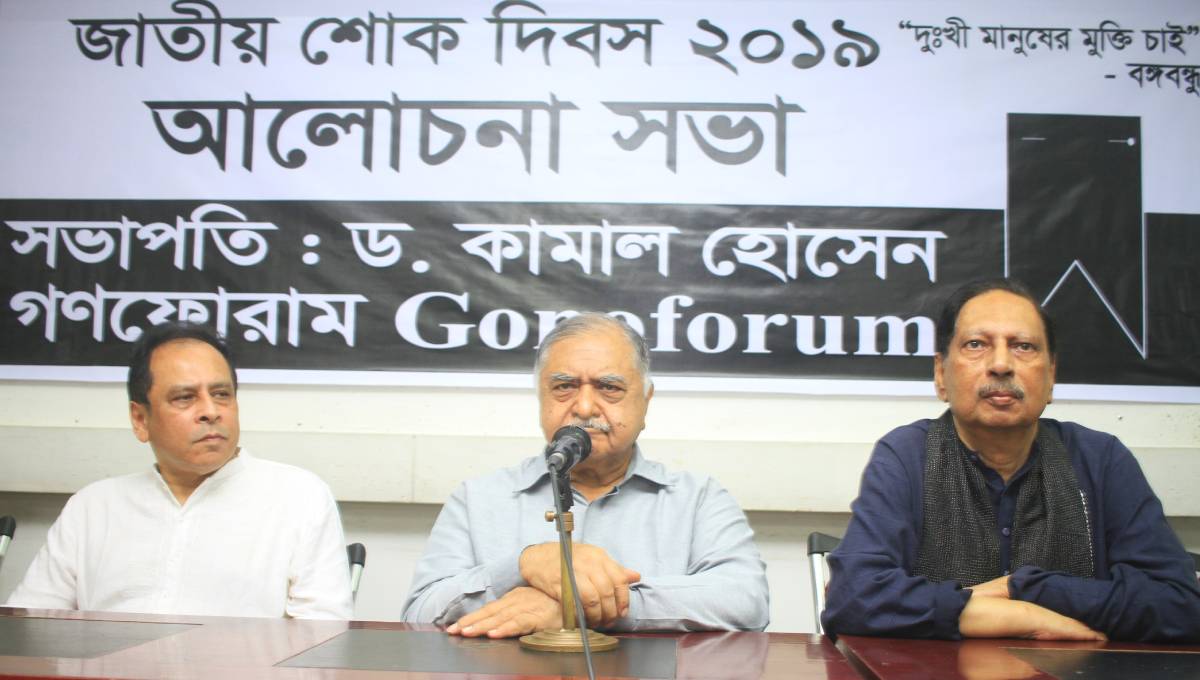 Dhaka, Aug 24 : Gonoforum President Dr Kamal Hossain on Saturday said those making their own fortunes depriving people of their ownership of the country and voting rights using the name and portraits of Bangabandhu are committing the ‘most grievous crime’.

“They (AL) are using the name and portraits of Bangabandhu, but indulging in acts contrary to his ideals. I think it’s the most grievous crime to work against Bangabandhu’s ideal and dreams using his name,” he said.

Speaking at a discussion, Dr Kamal further said, “Instead of exercising people’s power in protecting their interests, they (AL) are making their own gains showing his photos and using his name. It’s completely contrary to Bangabandhu’s dreams. So, we should make people understand what Bangabandhu’s real dreams were. Then, they’ll put up a resistance against the abuse.”

Gonoforum arranged the discussion at the Jatiya Press Club on the occasion of National Mourning Day commemorating the 44th martyrdom anniversary of Father of the Nation Bangabandhu Sheikh Mujibur Rahman.

Dr, Kamal, a close associate of Bangabandhu, said the Father of the Nation had struggled throughout his life for establishing pure democracy and making people owners of the country.

“If anyone thinks the country’s power and ownership belong to an individual and a party it will be tantamount to disrespecting Bangabandhu and defying his instruction. Because, he made people owners of the country through the constitution signed by him,” the Gonoforum chief said.

He said Bangabandhu even could not imagine an autocratic regime would rule Bangladesh. “Those who want to deprive people of their ownership of the country deviating from Bangabandhu’s dreams are bound to fail.”

Dr Kamal said those who are now exercising power, even at the grassroots level, are not elected with people’s votes. “They’re making their own fortunes instead of protecting people’s interests. They’re depriving people of their rights and power.”

Referring to the December-30 national election, he said people were deprived of their voting right. An election system has been established which is completely opposite to a free and fair election.

Dr Kamal said Bangabandhu clearly defined in the constitution that democracy means a system where people at all levels will be the owners of the country, and all the representatives will be elected through people’s votes in a credible election. “But his instruction has been ignored completely.”

The Gonoforum president said those usurped power and indulging in plundering abusing power are not owners of the country. “People’s ownership of the country will be ensured if they can freely exercise their voting rights through a fair and credible election.”

He recalled that late autocratic ruler HM Ershad had tried to stay in power for a longer time, but he was ousted through a united and fierce movement.

The Gonoforum chief urged people to get united to realise their rights, restore their ownership of the country and materialise the dreams of Bangabandhu.