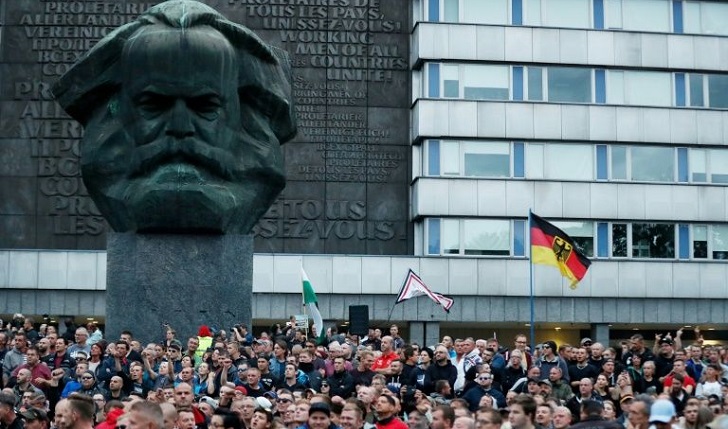 A giant Karl Marx statue towers in the East German city of Chemnitz but, 30 years after the Berlin Wall fell, another political wind is blowing here as the ex-communist city battles the image of a far-right hotbed.
Polls suggest that Sunday the region’s voters will deliver strong gains for the anti-immigration Alternative for Germany (AfD), an ideological ally of nationalist parties now ruling ex-Soviet bloc countries Poland and Hungary.

That would rattle chancellor Angela Merkel’s coalition government and force the other parties to team up to form majorities.

The AfD speaks to voters like Olaf Quinger, a 62-year-old butcher who voiced his fear and anger about the arrival of more than one million migrants in recent years.

“The main problem is that people who are launching a kind of invasion of our country are being treated the same way as Germans,” he said, standing at an AfD campaign booth. “That’s a huge injustice.”Many asylum-seekers have flashy smartphones, he said, and “very few of them are really refugees … they are here to leech off the state”.

He then complained that Saxony, whose people he said had bravely won their freedom, was now often characterised as “a right-wing extremist stronghold, a brown stain, a state trapped in the past, the embodiment of a dark Germany”.

“If you believe our politicians and media,” he told supporters, then Saxony — alongside with Poland and Hungary, which helped end the Soviet empire — are now “the hearts of darkness”.

“The truth is that Poland and Hungary — and Saxony — are the beating hearts of freedom and resistance, then and now.”Strong in the east
The rise of the AfD has confronted Germany anew with the legacy of the peaceful revolution of 1989, which brought political freedom but also economic pain.

Many “Ossis”, slang for east Germans, complain of a continued wealth gap and of western arrogance.

So-called “Wessis” meanwhile, often look down on the late-comers to liberal democracy and social diversity in the east where racist violence has flared repeatedly since the early 1990s.

Chemnitz earned infamy a year ago when thousands of neo-Nazis, football hooligans and enraged citizens rallied near the 40-tonne Marx bust to vent their anger at immigrants.

The spark that set off the days of unrest was the late-night fatal stabbing of a German man by a Syrian asylum seeker, who last week received a nine-and-a-half year jail term. An Iraqi suspect remains at large.

In the heated protests, AfD leaders marched with the radical Pegida and Pro Chemnitz movements. They were united in their anti-immigration stance and distrust of cosmopolitan elites and “establishment” institutions, parties and media, whom they regard as “traitors to the people”.

“We are the people,” is an old pro-democracy rallying cry that the AfD now levels against the “Merkel regime”.

Gauland praised Saxons for what he described as their instinctive, patriotic resistance to dictatorship and for being “a stake in the flesh of the multicultural, multiethnic, mentally controlled old Germany”.

But it also sparked the mass closure of ramshackle factories and state farms, massive job losses and a population flight.

Those who stayed behind often felt left behind, and their anger and envy can easily turn against newcomers.

“There is so much poverty among the pensioners,” said Heide Haenig, 70, a retired chemical technician.

She gestured to a nearby park where immigrants sat and claimed: “They act like they own Germany. They don’t even have to pay rent. They get 200 euros per child… and then they have seven children!”

Not everyone shares those views. Chemnitz mayor Barbara Ludwig, 57, Saturday took part in a civic discussion forum where people wrote goals like “tolerance” and “respect” on cardboard thought-bubbles.

Ludwig has voiced dismay that many now associate Chemnitz with “the Karl Marx head, German flags and a Hitler salute” — but insisted to AFP that “the city has a lot to offer, it is quite different from the image created a year ago”.

People elsewhere in Saxony are also pushing back. On the day Gauland spoke to 400 people in Chemnitz, over 40,000 rallied in the state capital Dresden against racism and for cultural diversity.

It was the largest rally there since the Wall fell.