Sudan urges UN to withdraw all peacekeepers by June 2020 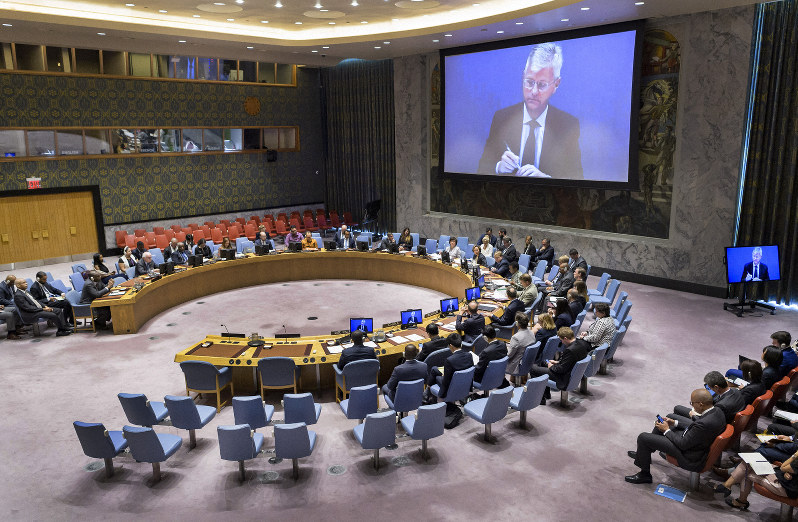 Photo: Members of the United Nations Security Council discuss situations in Sudan and South Sudan during a meeting Monday, Aug. 26, 2019, at U.N. headquarters as Under-Secretary-General for Peace Operations Jean-Pierre Lacroix is seen on a screen.

United Nations, Aug 27 : Sudan urged the U.N. Security Council on Monday to lift its suspension of troop withdrawals and ensure all peacekeepers leave Darfur by June 2020, but the African Union said overall security in the vast western region “remains volatile.”

Sudan’s U.N. Ambassador Omer Mohamed Siddig told the council it’s time to shift from peacekeeping to peacebuilding in Darfur, and to end restrictions on the government’s movement of arms and troops in and out of the region.

In late June, the Security Council voted unanimously to put the brakes on the withdrawal of the joint U.N.-African Union peacekeeping force from Darfur as the country dealt with a political crisis. It extended the mandate of the force, known as UNAMID, until Oct. 31, and it asked the U.N. and AU to make recommendations by Sept. 30 on what the council should do about continuing the withdrawal.

The Darfur conflict began in 2003 when ethnic Africans rebelled, accusing the Arab-dominated Sudanese government of discrimination. The government in Khartoum was accused of retaliating by arming local nomadic Arab tribes and unleashing them on civilian populations — a charge it denies. In recent years, as the result of a successful government military campaign, the rebellion has been reduced to a rebel Sudan Liberation Army faction headed by Abdul Wahid Elnur in Jebel Marra.

In July 2018, the Security Council voted to dramatically cut the UNAMID force in response to reduced fighting and improved security conditions. The target for ending the mission is June 30, 2020.

Smail Chergui, the AU commissioner for peace and security, told the council that Darfur still faces “intermittent armed clashes” between government forces and Elnur’s rebels, who also have abducted civilians and staff of nongovernmental organizations for ransom, robbed commercial trucks and looted property of local media and humanitarian organizations.

U.N. peacekeeping chief Jean-Pierre Lacroix and Chergui both expressed concern about growing tensions between farmers and herders in Darfur, and the AU commissioner said the current farming season is likely to see more land-related violence.

Chergui said inadequate judiciary, police, prosecution and prison facilities outside the main urban centers are also having “an adverse impact on the security situation and in ensuring accountability for serious crimes and human rights violations.”

The Darfur conflict took place under the three-decade autocratic rule of former President Omar al-Bashir, during which Sudan was convulsed by a bloody civil war and rebellions, not only in Darfur but in Blue Nile and South Kordofan states. Al-Bashir’s rule ended in April when the military ousted him after mass street protests by a pro-democracy movement which began late last year.

A power-sharing agreement signed earlier this month between the military and protesters calls for the government to reach a peace agreement with armed groups within six months.

Up to now, Elnur’s SLA faction has refused to join the Darfur peace process. And the Sudan People’s Liberation Movement North, led by Abdel Aziz al-Hilu, which has fought against Sudanese security forces in Blue Nile and South Kordofan states for much of the last decade, has also refused to talk peace.

Sudan’s Siddig called on the international community to join the new transitional government “in inducing the revolutionaries who fought for toppling the previous regime to join hands with us to uplift the plight and miseries of our people who suffered the consequences of war.” He also urged countries hosting leaders of armed groups to convince them to come to the peace table.

Chergui said the armed movements say their concerns are not adequately reflected in the agreement between the military and the protesters.

“It is important that the armed movements are fully engaged in the political process,” he stressed, and “it is imperative” that Elnur and al-Hilu are persuaded to join the process.

On a positive note, he said, “the current political environment and the changes taking place in Sudan provide a unique opportunity for ending the armed conflict, and for achieving comprehensive and lasting peace in Darfur and Sudan as a whole.”

The AU commissioner urged the international community to support “all actors.”

The U.N.’s Lacroix also congratulated the Sudanese people for choosing “the path of inclusive decision-making, equality and equity, and freedom and human rights for all” — and he said it’s an opportunity “to put a definitive end to the conflict in Darfur.”

He said once the transitional government forms a new cabinet, “we will engage … on a range of issues, including the drawdown of UNAMID, planning for a transition from peacekeeping to peacebuilding, next steps for the Darfur peace process, and post-UNAMID engagement.”

Lacroix said an AU-UN-Sudan meeting has been proposed on the sidelines of the U.N. General Assembly’s annual meeting of world leaders in late September, and he and Chergui plan to travel to Sudan together in early October.