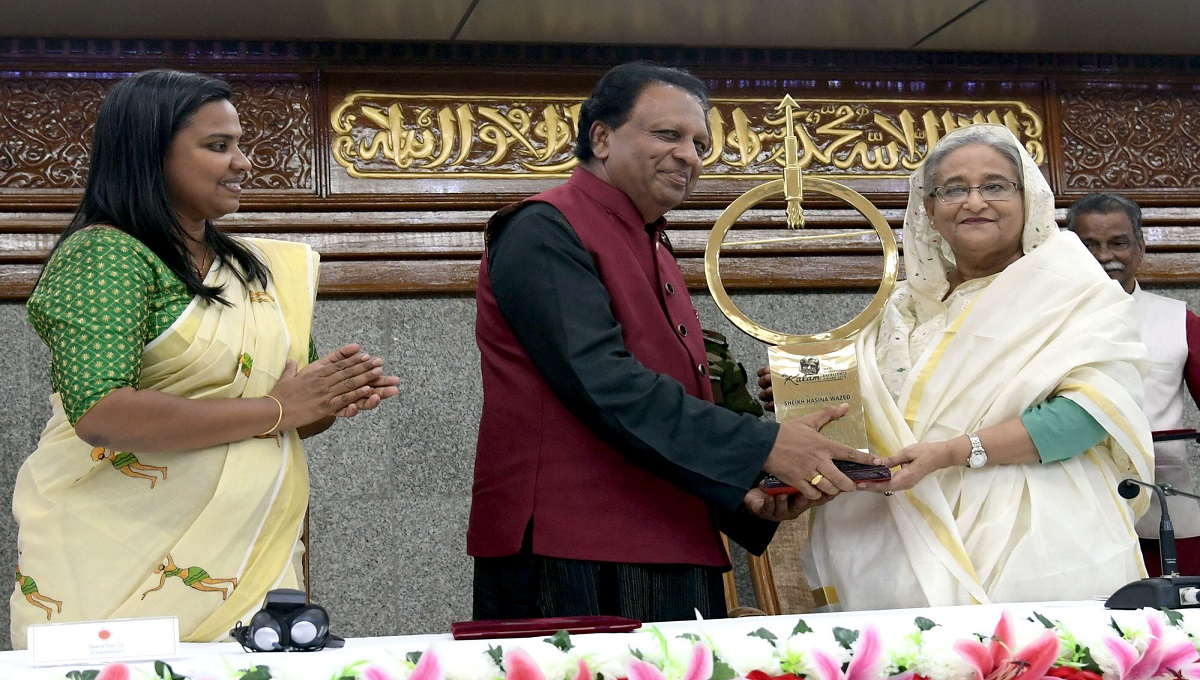 Chief Adviser of the Dr Kalam Smriti International Advisory Council Ambassador T.P. Sreenivasan handed over the international accolade through a ceremony at the Prime Minister’s Office in the afternoon.

The award is conferred upon Prime Minister Sheikh Hasina in recognition of her commitment to a close and mutually satisfying India-Bangladesh relations, welfare of her people, particularly women and children, and international peace and cooperation.

“This award will certainly inspire me and my government to strive for the achievement of greater inclusive development for my people while keeping in mind the need to ensure the conservation and protection of our natural ecosystems,” she said.

The Prime Minister extended her sincere thanks to the organisers for conferring upon her the Dr Kalam Smriti International Award.

She also congratulated to the past recipients   of this award in   recognition   of   their works towards attaining sustainable development for their respective countries and for the globe as a whole.

Chairperson of the Dr Kalam Smriti International Deena Das read out the citation.

The citation further says Dr Abdul Kalam as the President of India and Sheikh Hasina as the Prime Minister of Bangladesh fostered cooperation between India and Bangladesh and worked together for a prosperous world free from poverty, hunger and illiteracy.

“They share a common vision of a peaceful and prosperous South Asia, free of tension, conflicts and terrorism. The common values of freedom from oppression brought the two peoples together in the liberation of Bangladesh in 1971, which guides us even today,” the citation states.

It notes that the award is a testimony to the contribution made by Sheikh Hasina to the common good of mankind, which was a cherished dream of Dr. Abdul Kalam, who said: “Dream is not that which we see while sleeping, it is something that does not let you sleep.”

The Presidents of the Maldives, Ghana and Mauritius earlier received the prestigious award since its introduction in 2015.

Dr Kalam Smriti International Excellence Awards is given to honour presidents, statesmen or leaders, who have shown excellence in their field and have shown great vision to achieve the best for their country.

2019-09-16
Enamul Haque Renu
Previous: First look of Vidya Balan as Shakuntala Devi
Next: What just happened in British politics and what comes next?