Be humble and honest: PM to BCL leaders 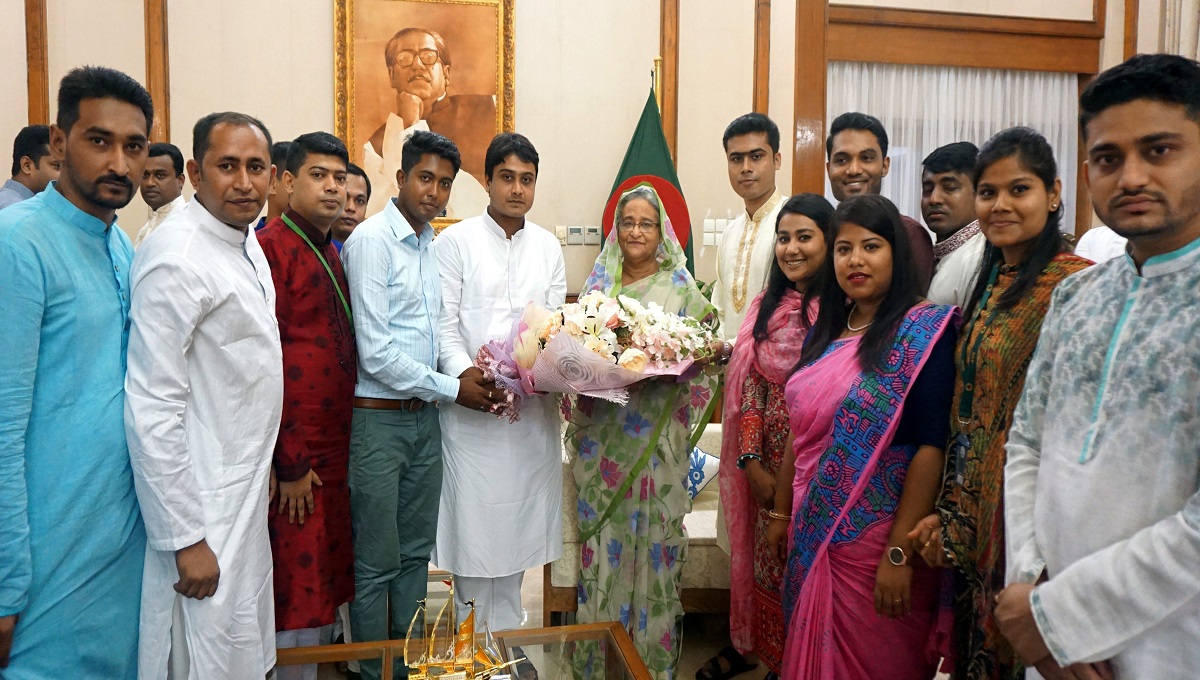 Dhaka, Sept 19 : Prime Minister Sheikh Hasina on Thursday directed the leaders of Bangladesh Chattra League (BCL) to do politics with honesty and humility for gaining the trust of people and brightening their image further.

“You’ll have to do politics with humility, honesty and ideology…you’ll have to build your own image and brighten that of the country as well,” she said pointing at the leaders of Bangladesh Chattra League (BCL).

The Prime Minister gave the directives when a group of BCL leaders, led by its new acting president Al-Nahean Khan Joy and new acting general secretary Lekhak Bhattacharjee, met her at her official residence Ganobhaban.

Sheikh Hasina asked the BCL leaders to try to gain the trust of people first by being humble, not demonstrating power.

Mentioning that students from different parts of the country are admitted to universities, Sheikh Hasina directed the BCL leaders to build good relations with them.

Issuing a note of warning, she said, “We’ve given the responsibility to you keeping trust and confidence in you. If you fail to keep up the dignity, we won’t need you.”

Talking about casinos, the Prime Minister said any clash and killing over casinos will not be tolerated.

Noting that foreigners are working in casinos, she questioned as to who brought them and gave them visas. “All things about casinos are being investigated,” she said.

Sheikh Hasina said the government attained many successes for the country and developed Bangladesh by working hard. “I’ll in no way allow any stigma on it (the hard-earned achievements). I won’t spare anyone. If anyone hampers it (the government’s success), he/she won’t be spared,” she said.

She directed the BCL leaders to leave the politics of showing power. “You shouldn’t move with motorcycles, protocol, and showing power.”

The Prime Minister said she had to face many adversities in her life. ‘’No one faced so much adversities as I faced in my life. I was given offer but I didn’t compromise.”

She asked them to strengthen the organisation to keep it on a strong foundation and take collective decisions to this end.

Highlighting the glorious history of student organisation, she said Chhatra League played the leading role in all struggles and democratic movements in the past.

The Prime Minister said it was Chhatra League which had raised Joy Bangla slogan and national flag of Bangladesh first following the directive of Bangabandhu.

Referring to the Bangabandhu’s Unfinished Memoirs, Jail Diary and Intelligent’s Secret Documents, she advised the student leaders to read the books.

They will get real teachings and lessons from there to be good politicians, the Prime Minister said.

The BCL leaders sought blessings of the Prime Minister to brighten the image of the student organisation and bring back its lost glory.

The new BCL president and general secretary greeted the Prime Minister by presenting a bouquet to her.

On September 14 last, Al-Nahean Khan Joy and Lekhak Bhattacharjee were given the charge of BCL president and general secretary respectively.