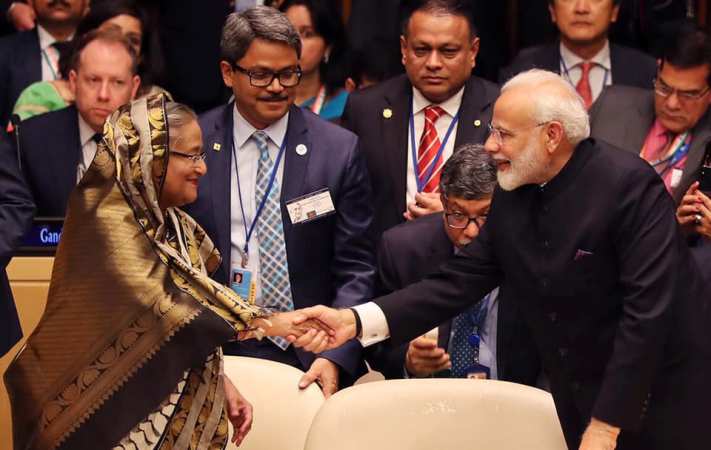 Prime Minister Sheikh Hasina has paid rich tributes to Mahatma Gandhi, expressing hope that humanitarian ideals and principles of the preeminent leader of the Indian independence and civil right movements would triumph over all divisiveness and establish an equitable world.

“We’re living in a world, where hatred and bigotry leading to terrorism and violent extremism are dividing the humankind more than ever before. Gandhiji’s philosophy of life and his unwavering support for all people can unite us today to meaningfully and effectively address formidable challenges of global concerns like hunger, poverty and impacts of climate change,” she said.

Sheikh Hasina said this while addressing an event on Mahatma Gandhi titled ‘Leadership Matters- Relevance of Mahatma Gandhi in the Contemporary World’ in New York on Tuesday afternoon.The Indian Permanent Mission to the UN organized the event at the ECOSOC Chamber in the UN Headquarters as part of the celebration programme of 150th birth anniversary of Mahatma Gandhi.

The prime minister said that Mahatma Gandhi, a true patriot, a statesman and a saint, dedicated his life to humankind and he was a beacon of hope, a light in darkness and a saviour in despair.

“His brilliant and mesmerising leadership showed the world that an individual could bring earth-shaking social and political change in a non-violent way,” she said.

Sheikh Hasina mentioned that selfless love and affection for people, regardless of social standing, caste, colour, creed or religion earned him the title ‘Mahatma’.

“His principles of tolerance, non-violence and harmonious coexistence would continue to guide us as we seek to build nations,” she said.

She went on saying: “In fact, his ideals of diversity are cherished and celebrated all over the globe, wherever democracy is practiced.”The prime minister said that Bangladesh is proud to have Gandhi Ashram Trust in its land since 1946. It follows the Gandhian philosophy of rural development, peace and social harmony, and works for the rural poor with particular focus on women, she said.

“As I pay my tribute to Ghandiji, I fondly recall my father and Father of the Nation Bangabandhu Sheikh Mujibur Rahman, who took inspiration from him during his formative stage of leadership,” she said.

She said that Gandhiji’s love for common people and ideals of non-violence contributed to shaping Bangabandhu’s vision of struggle against oppression and tyranny by the then Pakistani rulers against the peace-loving Bangalees.

In the face of provocations, she added, Bangabandhu remained unmoved and committed to the principles of non-violence.

Sheikh Hasina said that Bangabandhu declared the independence of Bangladesh in the early hours of March 26, 1971 and called for armed struggle against the Pakistan occupation military when they unleashed an unprecedented genocide against the unarmed civilians in Bangladesh.

“Whenever I look at Bangabandhu’s charismatic leadership, his sacrifice and struggle for people, I find a great degree of similarity with Mahatma Gandhi,” she said.

The premier said that Bangladesh is currently hosting almost 1.1 million Rohingyas, who fled violence and atrocities in Myanmar.

“Despite resource constraints and other serious challenges, our decision to shelter such a huge number of Rohingyas emanated from our conscience driven by love for humanity – a virtue we see in Bangabandhu and Mahatma Gandhi.”