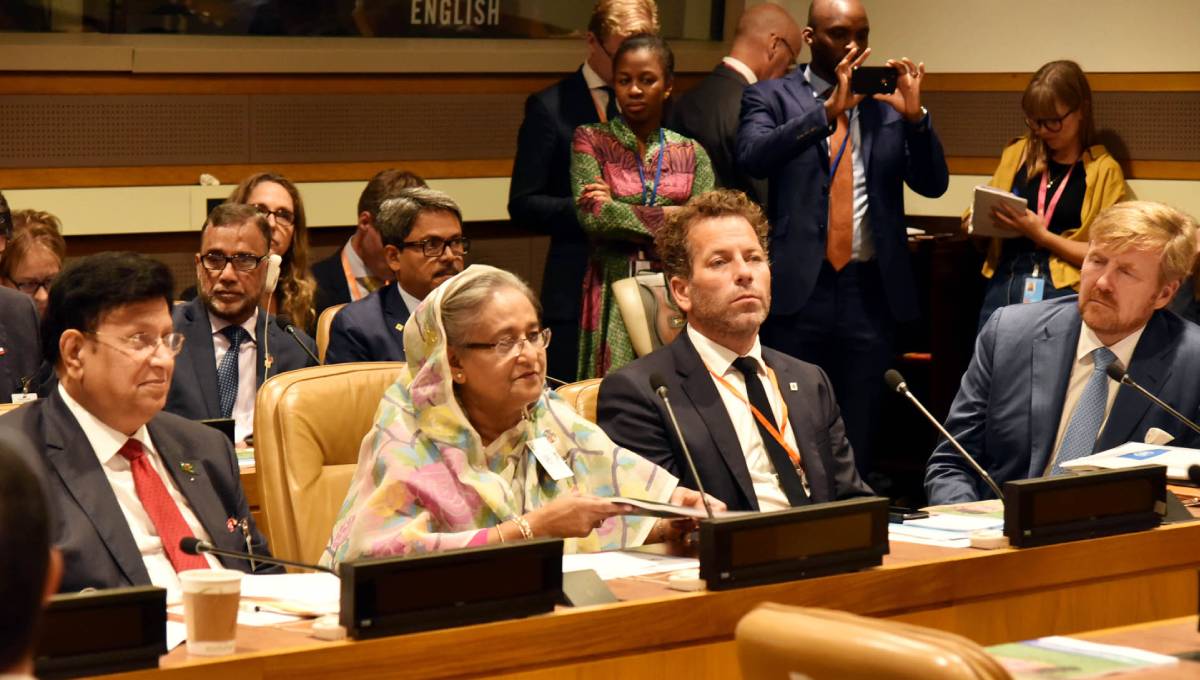 Prime Minister Sheikh Hasina will place the proposals during her speech at the 74th UNGA which is scheduled to be delivered on September 27. Photo: Courtesy

New York, Sept 25 : Prime Minister Sheikh Hasina is going to place four proposals at the UNGA seeking a peaceful and sustainable solution to the ongoing Rohingya crisis as it is affecting Bangladesh badly.

Sheikh Hasina will place the proposals during her speech at the 74th UNGA which is scheduled to be delivered on September 27.

These proposals are Myanmar must express clear political will manifested by concrete actions for sustainable return and reintegration of Rohingyas to Myanmar, and Myanmar must build trust among Rohingyas by discarding discriminatory laws and practices and allowing ‘‘go-and-see” visits to Northern Rakhine by Rohingya representatives.

The other two proposals are Myanmar must guarantee the security and safety of Rohingyas, among others, by deploying civilian monitors from the international community in Rakhine, and the international community must ensure that the root causes of the Rohingya problem area addressed while atrocious crimes committed against Rohingyas are accounted for. The OIC initiative to take the issue to ICJ is indeed a significant step towards that direction.

Sheikh Hasina made the announcement while addressing the High Level Side Event on Situation of Rohingya Minority in Myanmar Organized by the Permanent Mission of Bangladesh and the OIC Secretariat at the Conference Room 11 of the UN headquarters.

At the 72nd UNGA, she had offered a 5-point proposal, which included the full implementation of recommendations of the Kofi Annan Commission, and the establishment of a “civilian monitored safe zone” in the Rakhine State.

The Prime Minister firmly reiterated that the Rohingya crisis is a political one deeply rooted in Myanmar and thus its solution has to be found inside Myanmar.

Hasina categorically said the Rohingyas must be able to return to their homes where they lived for centuries.

She mentioned that it was regrettable that yet another year has passed by without any solution to the Rohingya crisis. The plight of the Rohingyas – persecuted in the Northern Rakhine state of Myanmar –is continuing unabatedly.

According to the UN reports, Rohingyas have been victims of atrocity crimes.

She said Bangladesh has been hosting 1.1 million forcibly deported Myanmar nationals. “We opened our borders for these people in the spirit of humanitarianism, which is a pervading moral fiber of Islam.

We’ll continue to do everything possible to ensure the basic needs of the Rohingyas pending their return to their homeland. We’ve allocated over 6800 acres of forest land for sheltering them incurring huge ecological hazard and environmental destruction,” she said.

The Prime Minister said Bangladesh has extended all kinds of humanitarian assistance, including shelter, food, health, water and sanitation.

She mentioned that a considerable number of public sector employees were deployed to coordinate management and law and order in the camps. New and additional physical infrastructures, including roads and power supply arrangements, had to be built on a regular basis. Some 219 medical facilities were set up over time, out of which 50 are being operated by the government.

In terms of financial assistance, around USD 120 million has been released as of now from Bangladesh’s national exchequer for direct assistance to the Rohingya. Among additional measures, by instance, the Ministry of Social Welfare took charge of the 39,841 Rohingya orphans registered so far.

Hasina said she has sanctioned more than USD 2.5 million from her special relief fund in support of the host community.

The Prime Minister said that the issue of accountability for human rights violations against the Rohingyas would be another crucial factor to ensure sustainable, safe and voluntary return.

“Bangladesh is following the ongoing proceedings of the International Criminal Court. We believe that OIC can also play a major role in fulfilling the need to ensure accountability through the Ad-Hoc Ministerial Group on Accountability,” she said.

In this connection, she appreciated the adoption of the Joint Communique of the 14th Islamic Summit Conference of OIC held in Makkah on May 31 this year.

Briefing reporters after the event, the foreign ministers said the participants extended a stronger support to Bangladesh on the Rohingya issue.

They also want safe, secure and dignified repatriation of the Rohingyas from Bangladesh, Momen said.